Examples of Active Transport in Plants and Animals

Active transport is the process by which materials move from a lower concentration to a higher concentration. Using adenosine triphosphate (ATP, needed for cellular energy) from respiration, molecules can move from one side of a cell wall to another. Keep reading to find examples of active transports in both plants and animals. 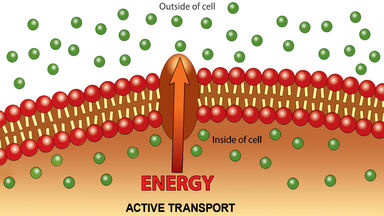 Examples of Active Transport in Plants

Though plants don’t appear very busy, the cells in their roots, stems, and leaves are constantly working. Minerals from soil, sugars from the sun, and water molecules must travel throughout the plant – and slip through cell walls. In the cases where energy (such as ATP) is required for this process, active transport takes place.

Some examples of active transport in plants include:

Examples of Active Transport in Animals and Humans

Active transport occurs when cells use energy to move molecules against the concentration gradient. Think of it like pushing a car uphill. If you were going downhill, gravity would do the work for you. But since you’re going against gravity, you need extra energy to do the job.

Active transport works the same way. For example, plant roots need every bit of water they can gather. The individual plant cells may have more water than the soil does, but they still need that water. That’s where active transport comes in – to move molecules where they might not naturally go.

Cells use the breakdown of ATP for primary active transport. The energy created by root pressure brings water molecules to higher concentrations in a plant, for example. Energy from cellular membrane pumps, such as the sodium-potassium pump, creates enough energy to move molecules across the membrane.