Examples of Adjectives and How to Use Them

Where would we be without adjectives? How would we describe a pretty flower or enjoy an enchanting evening? Simply put, adjectives add further description to nouns. More specifically, they provide flourish to the English language and added a dose of color. When you spend some time examining examples of adjectives, you can electrify your writing with the appropriate injection of adjectival beauty. Ready to have some fun? Dive into a list of adjective examples and how to use them in sentences. 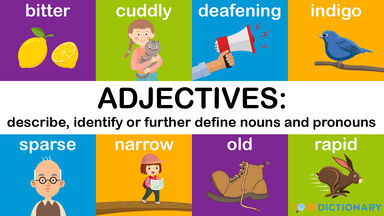 Adjectives describe, identify or further define nouns and pronouns. There are thousands of these descriptive words at your disposal. For ease, they've been broken up into lists of adjectives according to various functions, such as their ability to describe touch, color, shape, and emotion.

Even though these adjective lists are quite extensive, they're merely scratching the surface of the descriptive capabilities of the English language. That's why reading is such a gift. The more you read, the more you add to your vocabulary. In the meantime, explore a large selection to whet your adjectival appetite.

Did you have a bland bagel? How about a delicious entrée at a restaurant? Well, adjectives are what allow you to describe those wonderful tastes.

Sounds have different volumes. Something can be a whisper or blaring and anything in between.

The world is full of a rainbow of color. But if you didn't have adjectives, you wouldn't be able to describe them. Explore several descriptive color adjectives you might use every day to color your world.

Was that spider gigantic or large? It honestly doesn't matter because you can use whatever adjective you need to describe it best.

You can find a blob on your table or a distorted toy. Adjectives for shapes can come in handy.

How do you describe the passing of time or looking into the past? There are lots of different ways you can talk about time passing due to adjectives.

Adjectives To Describe an Amount

Whether it's an ample or minute amount, you need adjectives to describe it. Spice up your written word through these fun and descriptive adjectives.

Adjectives To Describe an Emotion

The emotions of people are vast. From abrasive to grumpy to lazy, you can a lot of different words that describe how a person feels.

Adjectives To Describe a Person or Personality

Everyone has that famous friend or a restless family member. Imagine how you would describe those around you without adjectives. Thankfully you don't have to. Just to make your life easier, check out this list of descriptive words for personalities or people.

A novel or letter wouldn't even hold weight if you couldn't use words like quirky and dull to paint a verbal picture of your characters. Explore words that describe a person's appearance.

Jazz up your discussion of situations with some descriptive adjectives. These words make a plot so much better!

Since there are so many different adjectives, check out a printable list to inspire you.

How to Use Adjectives

Additionally, you can use adjectives to complement a linking verb called a predicate adjective. So the adjective might provide more about how something is feeling.

Mind Your Love for Adjectives

Now that we've seen a nice sampling of adjectives, there's one thing left to note. It's best to use discretion with adjectives. You never want to overdo it. Generally, nouns and verbs should do most of the descriptive work in your writing. Don't simply tell your reader something is beautiful, exciting or interesting. Use your words to set a detailed scene and consider using a sprinkling of adjectives rather than a heavy dousing.

As you seek to strike that balance, expand your adjectival toolbox a little further with this list of positive adjectives. Having a wide variety of options at your disposal will allow you to choose the right adjective at the right time.