Examples of Adverbs in Sentences

Adverbs can mystify writers because they have a number of different functions within the English language. Reviewing examples of adverbs and adverb phrases can help you identify them and use this part of speech effectively. With a couple adverbs by your side, you can add further description, describe an action, or intensify the meaning of another word. 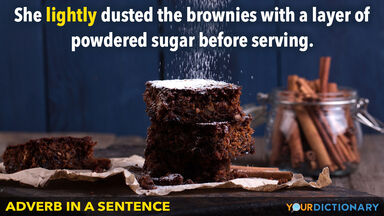 Adverbs modify verbs, adjectives, or other adverbs. They can add to or change the meaning of a word. A great way to spot adverbs is to look for words that end in -ly.

Let's take a look at a few examples:

If you're a teacher, our activities with adverbs and lessons about adjectives vs. adverbs can help your students learn to spot adverbs effectively.

Adverbs Tell How It Happened

Adverbs are part of a category of descriptive language because they describe how something was done. For example:

Adverbs Tell Where It Happened

Some adverbs describe the location of an action. Examples of adverbs like this would include:

Adverbs Tell When It Happened

Examples of adverbs that describe when an action occurred include:

Adverbs Tell the Extent of the Action

Adverbs also describe the extent to which something was done, including:

Here are some sentences with the emphasizing adverb in bold:

Adverbs and adverb phrases that tone down the feeling or mood include:

Adverb phrases function like adverbs, modifying a verb or adjective. They add more information to a sentence, telling us when, how, where, and to what extent. Adverb phrases don't always contain an adverb and can start with a preposition or the infinitive form of a verb.

Here's a list of sentences with the adverb phrase in bold:

An adverb or adverb phrase is a workhorse in the world of grammar, changing and enhancing the meaning of the accompanying verbs, adjectives, or adverbs. However, adverbs should be used sparingly. When you use multiple adverbs, you risk alienating your reader with dense prose that's too difficult to read.

Review these adverb flashcards for more examples and help with your adverb practice!