Examples of Amplification in Literature

Amplification is so important, it’s a member of the literary device tribe. Other prominent members include similes, metaphors, and personification. As such, examples of amplification in literature will prove to add more color and intrigue to an excerpt. Let’s take a look. 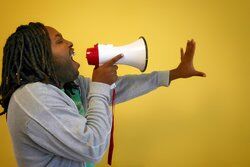 Amplification with a megaphone
Advertisement

The amplification literary definition makes it clear that it offers more information to the reader. In the end, the writer and the reader should have a sentence that’s worthwhile and far more telling. Amplification kicks simple sentences out the door and welcomes fragrant, descriptive lines instead. Let’s enjoy a few examples.

The Twits by Roald Dahl

A person who has good thoughts cannot ever be ugly. You can have a wonky nose and a crooked mouth and a double chin and stick-out teeth, but if you have good thoughts it will shine out of your face like sunbeams and you will always look lovely.

Here, Roald Dahl took a basic, declarative sentence and bolstered it with amplification. The “ugly thoughts" that "show on the face” are amplified in the next line. Not only does their ugliness show every day, every week, every year, it also gets progressively uglier.

Did you also notice his use of repetition? He said, "Every day, every week, every year." He could've just said "always" or "all the time." But, doesn't this seem more impactful? Nearly every sentence in this excerpt goes above and beyond what's essential or necessary to paint a vivid picture for his readers.

The Scarlet Letter by Nathaniel Hawthorne

It is a little remarkable, that -- though disinclined to talk over much of myself and my affairs at the fireside, and to my personal friends -- an autobiographical impulse should twice in my life have taken possession of me, in addressing the public.

In Roald Dahl’s example, he used amplification by forming a completely new sentence. Nathaniel Hawthorne, however, makes use of em dashes to fill his prose with robust detail. Em dashes are akin to commas and parentheses, but the main gist is that they signal a pause where further explanation -- or amplification -- will be offered.

A massive tree centuries old holds out against the odds here across from my mother's house, one of the biggest trees in Pittsburgh, anchored in a green tangle of weeds and bushes, trunk thick as a Buick, black as night after rain soaks its striated hide. Huge spread of its branches canopies the foot of the hill where the streets come together. Certain times of day in summer it shades my mother's front porch. If it ever tore loose from its moorings, it would crush her house like a sledgehammer.

Isn’t that fun? Amplification can be used to describe something we see every day but possibly take for granted. John Edgar Wideman takes this moment to really paint a picture for us. This massive, centuries-old tree is “thick as a Buick, black as night.”

This sample is a real treat because, within his amplification, we also enjoy a picturesque simile. This tree could “crush her house like a sledgehammer.” Similes draw comparisons using the words “like” or “as.”

Alexander and the Terrible, Horrible, No Good, Very Bad Day by Judith Viorst

Here's another example of repetition being used in conjunction with amplification. The narrator said he was being scrunched. In the next line, he said he was being smushed, which is effectively the same thing. In the end, he wasn't just having a bad day. He wasn't even having a very bad day. It was a "terrible, horrible, no good, and very bad." Poor kid!

After Tina wore her socks for ten more days, a whole flock of Canada geese flew over her house and dropped right out of the sky from the smell. Two moose walked through her yard and fell over from the smell. Ducks, raccoons, and squirrels fell over when she walked to school.

Boy, oh boy. That's some foot odor. The illustrations in this book are fantastic; they align with Tina's uncanny ability to cause multiple fainting spells. Instead of relying on inventive adjectives or adverbs, the author chose to paint a scene that would shock any onlooker. She didn't just catch people by surprise; she nearly wiped out multiple species of animals with the stench of her smelly socks!

In the examples above, we enjoyed amplification in many different forms. Sometimes a new sentence is constructed. Sometimes the amplification is packed between a set of em dashes. When crafting such complex structures, it’s important to make sure your punctuation game is on point.

The article, 8 Times Commas Were Important, will help you punctuate with commas around clauses. Use those clauses to amplify your sentences with added detail. Semicolons and colons will also be your friend when seeking to amplify your thoughts. Colons, semicolons and dashes will allow you to spread your wings and fly.

Take on an attitude of amplification where possible. It’ll allow to highlight the importance of a particular line in your prose. And, by doing so, you can also increase the reader’s emotional response to your work - the icing on your verbal cake.

You might find that you’re crafting quite a bit of complex sentences whenever you’re exercising your right to amplify. These complex sentence examples will help you keep your punctuation in check.