Examples of Anecdotes: Short Stories With a Practical Purpose

An anecdote is a short story or account about a person or event that is typically amusing, informative, entertaining, or biographical in nature. Anecdotes usually relate to the subject matter that people are discussing to make a point or simply share a relevant story. They can be used in everyday life or in literature. For example, if coworkers are discussing pets, and one person tells a story about how her cat comes downstairs at a certain time every night, then that individual has just shared an anecdote. 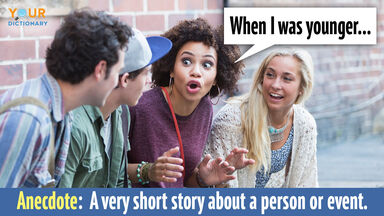 woman telling anecdote to friends when I was younger
Advertisement

Anecdotes cover a wide variety of stories and tales, especially since they can be about basically any subject under the sun. You might be checking out at the supermarket one day and the cashier comments on your brand of apple juice. Perhaps that will spark the employee to share a quick story about the summer she and her four-year-old went apple picking in Upstate New York. That's an anecdote; such stories come up all the time. Other everyday examples of anecdotes include:

It's very common for people to share stories about their childhood experiences with friends and other family members. Reminiscing in this way can be a lot of fun. It's also a great way to get a conversation started or keep one going. After all, everyone has childhood experiences they can share, and to which others can relate.

People experience interesting things throughout their lives, not just during childhood. Sharing anecdotes about one's experiences is a fun way to interact with friends, coworkers and family members.

Your favorite novels are giant stories with complex narratives. In the midst of each story, the characters might share little anecdotes with one another. It's a nice opportunity for the character to blossom and for the reader to learn more about them.

The Great Gatsby contains a number of anecdotes. In this example, Daisy Buchanan shares a story about the butler. This anecdote is significant because the Buchanan family kept the story of their butler a secret. Interpretations of this story and its importance have been discussed by readers for years.

“'I'll tell you a family secret,' she whispered enthusiastically. 'It’s about the butler’s nose. Do you want to hear about the butler’s nose?... Well, he wasn’t always a butler; he used to be the silver polisher for some people in New York that had a silver service for two hundred people. He had to polish it from morning till night, until finally it began to affect his nose --'
'Things went from bad to worse,' suggested Miss Baker.
'Yes. Things went from bad to worse until finally he had to give up his position.'”

Harry Potter and the Goblet of Fire by J.K. Rowling

Dumbledore shares the following anecdote with a visiting headmaster in Harry Potter and the Goblet of Fire by J.K. Rowling. This story relays the magical majesty of Hogwarts.

"Oh, I would never dream of assuming I know all Hogwarts' secrets, Igor. Only this morning, for instance, I took a wrong turn on the way to the bathroom and found myself in a beautifully proportioned room I had never seen before, containing a really rather magnificent collection of chamber pots. When I went back to investigate more closely, I discovered that the room had vanished."

The Happy Prince and Other Tales by Oscar Wilde

Who says anecdotes have to come from humans? The short story below was relayed by the Duck in Oscar Wilde's The Happy Prince and Other Tales.

"I had thoughts of entering public life once myself,' remarked the Duck; 'there are so many things that need reforming. Indeed, I took the chair at a meeting some time ago, and we passed resolutions condemning everything that we did not like. However, they did not seem to have much effect. Now I go in for domesticity, and look after my family."

In Nora Robert's Dark Witch, Meara relays an anecdote to Iona that provides the audience with unique insight into the relationship between the book's main characters.

"I'll tell you they were in love. Young and wild for each other. Happy in it, though they scraped and squabbles. She was going into seventeen when they came together the first time. It was after they'd been together the mark came on him. He didn't tell her. I don't know whether to blame him for that, but he didn't tell her. And when she found out, she was angry, but more, she was devastated."

Different Purposes for Telling an Anecdote

Anecdotes can serve a variety of purposes. Whenever an anecdote is introduced, either in real life or fiction, it provides background or characterization information. An author might write a scene where one of the characters tells the other a bit of their backstory, usually to create depth and intrigue. In real life, anecdotes often convey meaning via stories instead of direct explanation.

Sometimes telling a story just makes people laugh or brightens the mood. Here are some examples of anecdotes meant to harken back to happy memories:

In most anecdotes, people are talking about their past. They are looking back favorably on moments in their lives and sharing the joy of that time with others. Here are some examples of anecdotes with a hint of reminiscence:

Sometimes, just laying out rules for individuals is not effective, They need to hear frightening stories of dangers that can be avoided by following regulations. Here are some examples of cautionary anecdotes:

To Persuade or Inspire

Sometimes, people just want others to know they've faced similar struggles and they're there to help. They can also be conveying the message that, with a little bit of hard work, brighter futures are ahead. Here are some examples of inspirational anecdotes:

Storytelling 101: Tips for Writing an Anecdote

An anecdote isn't a full work of writing on its own. Think of it as a small story within a larger story. The key to writing anecdotes is to know what you want to accomplish and think of a brief way to convey the message in a story form.

Anecdotes don't always have to serve specific purposes. They can just be part of a natural conversation with friends and family. They're a nice way to get to know one another and to engage in fun dialogue. That's why anecdotes are such a useful tool for writers. What better way to get to know characters than through their own retelling? Build your storytelling skills even more by learning how to use a wide variety of rhetorical devices. Soon, you'll be highly skilled with all kinds of literary devices.