You're a brave and outgoing public speaker, but your best friend clams up at the thought of talking on stage. They are your antithesis: someone or something with a contrary characteristic. Authors and speakers use antithesis between characters, concepts and situations to draw contrasts in their work — which can be a very effective way to persuade an audience to support a character, vote a certain way or even buy a particular product. 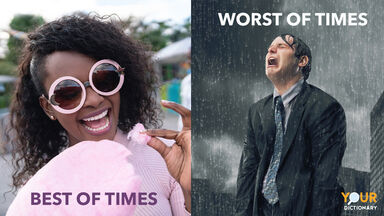 Antithesis Examples in Literature and Film

Using antithesis as a literary device in stories helps to develop a conflict, paving the way to a resolution. It also allows the protagonist to develop some strength in character and fight back against antithetical forces.

In Julius Caesar by William Shakespeare, Marcus Brutus and Mark Antony were painted in opposite colors. Interestingly, the contrast isn’t stark. Shakespeare takes a more subtle approach to antithesis here, portraying Brutus as an honorable man, if slightly naive. Antony was also an honorable man, but he possessed a certain ruthlessness and ambition that Brutus lacked.

A Tale of Two Cities

A Tale of Two Cities by Charles Dickens begins: “It was the best of times, it was the worst of times.” Dickens epitomized the very idea of antithesis with this line. How can anything be both good and bad? In truth, life is always a simultaneous balance of the two.

Harry Potter and the Order of the Phoenix

John Milton writes that it is “better to reign in Hell, than serve in Heav’n" in Paradise Lost. Milton draws this stark contrast to make the point is that it may be better to be in power, even if it’s in the darkest depths of the netherworld, than to serve at the feet of another.

The Chronicles of Narnia

An Essay on Criticism

The “to err is human; to forgive divine" from Alexander Pope's An Essay on Criticism paints a striking image of two opposing forces. Mistakes are a part of what it means to be human. However, if you want to elevate yourself to a status higher than humankind, you’ll have to learn to forgive one another.

Snow White and the Seven Dwarfs

Beauty and the Beast

Even the title of Disney’s Beauty and the Beast is based on antithesis. Belle is the quintessence of beauty and the Beast is the epitome of ugliness. However, even though they’re initially presented as polar opposites, they still find a way to each other. And what is the Beast’s reward in the end? His beastliness is turned into beauty.

The venerable William Shakespeare writes, “Give every man thy ear, but few thy voice" in Hamlet. In a short statement, he uses antithesis to contrast talking with its opposite: listening. True to form, Shakespeare found an illustrative way to drive a simple point home.

Much like poetry, song lyrics use antithesis to create vivid mental images and to draw important contrasts. How better to paint a picture or tug on a heartstring than with an illustrative play on words?

Antithesis Examples in Speech and Advertising

Speakers frequently use antithesis to sway a crowd. On the same note, advertisers also use this rhetorical device to persuade their audience to buy a product. Take a look at a few noteworthy examples of historic moments and marketing campaigns.

Any time you make a decision between two options, you're comparing their characteristics and deciding which you prefer. In this way, antithesis can be a very effective persuasive tool. Use rhetoric to make decisions (or to persuade others to do so) in real life or in writing.