You have likely heard the term “arthropod” in biology class, but what are they and what are some arthropods examples? Arthropods are fascinating creatures with various characteristics. In fact, they are the largest and most diverse group on Earth, inhabiting land, sea and sky. 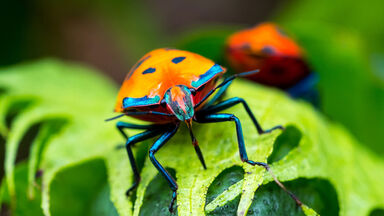 Arthropods are animals that are members of the phylum Arthropoda. There are many types of arthropods. More than 80% of all of the animals in the world are classified as arthropods, and there are over 1.2 million species known. With such a large group of animals, there is quite a lot of diversity — and quite a lot of examples — but they do have some similar qualities.

Some arthropod characteristics include:

Reproductive methods are diverse among arthropods, but most begin life as an egg. As they grow, their exoskeleton splits in the back and the arthropod slips out of it and grows another, larger one. This process can take a few minutes or several hours, during which time they are vulnerable to predators.

These examples of arthropods are sorted by subphyla:

Within the above categories, there are four basic types of arthropods.

Insects are fascinating and diverse creatures that are all very different but have some similarities. Typically insects have:

While insects typically have two pairs of wings, some only have one pair, such as flies. A few insects have no wings, like ants, fleas and lice. Insects are the only invertebrates that can fly.

Since there are three-quarters of a million insect species, it is best to just look at some of the common ones. They include:

Arachnids are eight-legged arthropods with no wings or antennae. Most arachnids live on land; but, a few species can be found in fresh and saltwater habitats. The three main orders of arachnids are:

There are over 100,000 species of arachnids. Common ones include:

All crustaceans have ten legs or more and most of them are found living in water. The majority of aquatic crustaceans live in saltwater, but a few live in lakes and rivers. Woodlice are one of the small numbers of crustaceans who live on land.

The number of species of crustaceans is over 40,000. Some of the common ones include:

Myriapods are the most specific group of arthropods, but there are still over ten thousand species out there. Their characteristics include:

There are four classes of myriapods:

While most myriapods are classified as centipedes or millipedes, there are thousands of species to discover.

Discover Arthropods in Your Own Backyard

There are over a million arthropods to study. With so many options, it can be overwhelming. Thankfully, there are resources to learn about these fascinating creatures. Of course, the best way to learn about arthropods is in your own backyard. Many common insects such as ants, flies, spiders and more are easy to find and observe. Whether you love to garden or play in the great outdoors, there are many ways to explore the arthropod phylum.