Examples of Heroes & Other Characters in Arthurian Legend

When you think of the legend of King Arthur, you may picture his famous Round Table. But who are the knights who sit around this table, and who performs the heroic deeds in Arthurian legend? Keep reading to learn more about the heroic Arthurian legend characters, as well as other important characters from the stories. 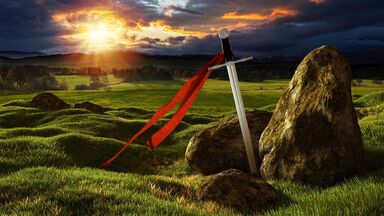 The legend of King Arthur has been passed down from Celtic folk tales and mythology. There are hundreds of Arthurian poems, stories and manuscripts, including Yvain, the Knight of the Lion by Chrétien de Troyes and Le Morte d'Arthur by Sir Thomas Malory. There are also hundreds of heroes in Arthurian legend. Here are the Knights of the Round Table who are referenced most often and who have their own tales of chivalrous glory.

The main hero of Arthurian legend is King Arthur himself. After pulling a sword from an anvil, Arthur Pendragon earned the British crown. He later received the sword Excalibur from the Lady in the Lake at his advisor Merlin's request.

King Arthur and Queen Guinevere held court in the castled city of Camelot. He and his knights bravely fought beasts, rescued damsels in distress and searched for the Holy Grail. They were known for their chivalry, high moral character and loyalty.

Sir Lancelot, the father of the pure Sir Galahad, was the most trusted of the knights and was loved by Arthur. He was a heroic warrior under the king's command. However, Lancelot's love affair with Queen Guinevere not only broke Arthur's heart but brought about the end of Camelot with a vicious civil war.

Galahad was one of the few Arthurian heroes without character flaws or sin. He always performed the courageous, benevolent and right action. He is one of the three knights who achieved the Holy Grail, along with Sir Bors the Younger and Sir Percival.

Bedivere was one of the first Knights of the Round Table and maintained his loyalty throughout his life. He died fighting on King Arthur's behalf. He is one of the few knights present at King Arthur's deathbed and fulfilled Arthur's command to return Excalibur to the lake.

Son of King Bors the Elder, Sir Bors de Ganis was a trusted advisor of both King Arthur and Sir Lancelot. He accompanied Sir Galahad and Sir Percival on the quest for the Holy Grail and eventually killed Mordred's older son, Melehan, in battle.

Sir Gaheris, another nephew of King Arthur, accompanied his brothers and the other knights on many adventures. He was described as poorly spoken but an excellent knight — possibly one of the best of the Round Table. Gaheris is best known for being exiled after killing his mother, Morgause.

The youngest of King Arthur's nephews, Sir Gareth was brother to Gawain, Gaheris and Agravain. He sometimes went by the nickname Beaumains ("Good Hands") in the Arthurian legend after attempting to prove his worthiness to knighthood by posing as a lowly kitchen boy. He, along with his brother Gaheris, was accidentally killed by Lancelot, whom Gareth served as page and loyal knight.

One of King Arthur's youngest knights and closest companions was Sir Gawain. He strove to do the right thing and would follow the law implicitly. His story is prominently featured in Sir Gawain and the Green Knight, in which Gawain proved his integrity by meeting the challenge of the mysterious Green Knight.

Featured most prominently in the epic Welsh poems Elegy for Geraint and Geraint and Enid, Sir Geraint was a knight on the quest for adventure. He met Enid, daughter of Earl Niwl, after avenging the honor of Queen Guinevere.

Also known as Sir Hector or Antor, Sir Ector is the father of Sir Kay. He took Arthur in as a child and raised him until Arthur became King of England. He is portrayed as both a king and a lord, depending on the version of the legend.

Sir Kay was not Arthur's biological brother, but as the son of Sir Ector, he was raised with the future king as an adopted brother. He became one of the first Knights of the Round Table and is often represented to have superhuman abilities as a warrior.

Sir Lamorak is in the middle of much of the drama between the Knights of the Round Table. His father, King Pellinore, was killed by Sir Gawain and Sir Gaheris in retaliation for him killing their father, King Lot, years before. Lamorak then had an affair with Morgause, the mother of Gawain and Gaheris, and fled Camelot after Gaheris executed Morgause. He was later killed by Gawain in retribution for the affair.

Known as a humble and gracious (if not a bit naive) knight, Sir Percival was quick to defend the honor of the court. He was among the knights to complete the quest for the Holy Grail and most notably appeared in Chrétien de Troyes' Perceval, the Story of the Grail.

Sir Tristan was a Knight of the Round Table who appears often in Arthurian stories. However, he is best known for being the hero of his own romantic tale, Tristan and Iseult (or sometimes Isolde), in which the daring knight falls in love with Iseult, the Irish princess.

Arthurian legend is full of valor, revenge, love, and betrayal. Its heroes are typically the focus of their stories, but they aren't the only characters who associate with King Arthur. Other characters in Arthurian tales range from innocent to beguiling and from helpful to outright villainous.

Merlin, a magical wizard, was the teacher of the Lady of the Lake and King Arthur himself. He enabled Arthur's birth by helping Uther to disguise himself as Gorlois, supervised Arthur's upbringing and education, and served as King Arthur's trusted advisor. He is credited for designing the Round Table and Camelot, as well as the ring at Stonehenge.

Guinevere was considered the most beautiful woman in all the land. She and Arthur were happy for many years until the appearance of Lancelot, with whom she had a kingdom-ending affair. Some legends say she was a goddess and, after Camelot was no more, she returned to the realm of goddesses.

Lady of the Lake

The Lady of the Lake was an enchantress who appeared throughout medieval literature. Her role in Arthurian legend is that of the source of Excalibur, Arthur's mythical sword. She receives the sword back from Sir Bedivere after the death of King Arthur.

Morgan Le Fey was Arthur's half-sister. Her mother was Igraine and her father was Gorlois. She had an affair with Arthur's nephew and Guinevere did not approve and told Arthur. Later on, Morgan told Arthur of the affair between Guinevere and Lancelot, so she had her revenge.

Another half-sister of Arthur, Morgause was the wife of King Lot and the mother of Gawain, Gareth, Gaheris, and Agravain. She was also the mother of Mordred, the product of an affair with her Arthur (whom she did not know was her half-brother). Morgause was killed by her son Gaheris after her affair with Sir Lamorak was discovered.

Early accounts of Mordred depict him as Arthur's nephew and a legitimate son of Morgause and King Lot. However, later versions of Arthurian legend describe him as the son of Morgause and Arthur, her half-brother. He was knighted by Arthur and briefly joined the Knights of the Round Table before exposing the love affair between Guinevere and Lancelot. Mordred overthrows his father's rule in the aftermath of Lancelot's betrayal.

Igraine, the mother of King Arthur, was originally married to Gorlois, the Duke of Cornwall. She conceived Arthur with King Uther Pendragon when he was disguised as Gorlois, and later married Uther, making her queen. Upon Arthur's birth, Igraine gave him to Merlin, who brought him to Ector to raise as a ward. She had many daughters with Gorlois, including Arthur's half-sisters Morgause and Morgan Le Fey.

Arthur's father was King Uther Pendragon, whose infatuation with Igraine led to war with her husband, Gorlois. He is an auxiliary character in much of Arthurian literature, but is credited with helping Merlin to bring the stones to Stonehenge.

The Enduring Tale of King Arthur

The story of King Arthur and his valiant knights endures because it presents an idealized version of decency, chivalry and heroism. These characters have appeared in nearly a millennium's worth of literary sources, and their influence continues to this day. Get a chuckle out of these examples of parody from Monty Python and the Holy Grail, which was loosely based on Arthurian legend. Or, if you'd like to learn more about heroes in other literary works, check out examples of each stage of the Hero's Journey.