The general definition of assimilation is the process of two different things coming together to blend and, in some cases, create a new thing all together. However, that is a very simplistic understanding of the process itself as there are many types of assimilation. Review these assimilation examples to develop a better understand what it is. 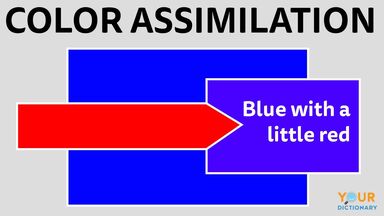 Blue and red as examples of assimilation
Advertisement

This is perhaps one of the easiest models that demonstrates assimilation. Color assimilation occurs when two colors blend together to create a completely different color. It can also occur as an optical illusion, such as when two separate but adjacent colors are grouped together perceptually such that the difference between the separate colors is reduced. Even though the colors are not literally blended, viewers perceive them as being very similar or even the same.

Cultural assimilation happens when two cultures or groups of people influence one another. Cultural customs, traditions and religious practices can all be assimilated between two or more cultures. Often times, these groups live near one another. Influence may be derived from trade, invasion and/or intermarrying between the groups.

Religious assimilation occurs when the faith-based beliefs of more than one religious tradition are combined. This often occurs within families when people of different religions marry. It occurs within faiths as new religions are established or due to changes in the larger culture or society as a whole.

This type of assimilation often occurs when two neighboring groups of people or territories influence one another's way of speaking. It can involve speech patterns, dialect or accents associated with certain regions, but it is often about actual spoken language differences. When people move to different areas, they often pick up speech patterns specific to those areas.

Physiological assimilation refers to the conversion of ingested nutrients into energy that fuels the body as a greater whole. When you hear the phrase "you are what you eat," it's more than just a cute saying. That phrase is actually referring to an example of assimilation.

Also referred to as data assimilation, statistical assimilation in a statistical capacity refers to the gathering data over time to in order obtain a clearer picture of that which is being studied. Data is assimilated and allows the person compiling the statistics a better understanding of how things work over all. A piece of data collected is assimilated into the model and becomes part of the mechanism by which all of the subsequent data is interpreted.