Examples of Assonance in Poetry

Assonance poems are abundant in literature. Much like alliteration repeats consonant sounds, assonance features repeated vowel sounds in words that are close to each other. But finding examples of assonance can be trickier than finding alliteration since the vowel sounds are often only heard when read aloud. Keep reading for examples of poetry with assonance that are pleasing to the ear. 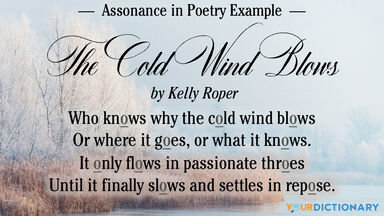 Assonance and Other Literary Sound Devices in Prose and Poetry

Poetry often includes sound devices that tie the words and lines together. Assonance is one of those sound devices — it repeats vowel sounds in two or more words in a poem. While assonance may be hard to find in the text, it's quite easy to find when you read a poem out loud.

There are two other sound devices found in prose and poetry besides assonance. They are:

Using all of these sound devices can add an underlying rhythm to a poem. They make poetry beautiful to read silently or aloud.

Very skilled poets use assonance in poetry to change the mood of the poem. Long vowel sounds will decrease the energy at that point in the poem and make the mood more serious. Higher vowel sounds will increase the energy and lighten the mood. Poets are very careful with their word choice in order to best fit the mood of their poetry. Read these classic and original examples of poetry to better understand the definition of assonance.

The first of the examples of assonance poems is an excerpt from "Bells" by Edgar Allan Poe. Notice how he hits the short /e/ sound over and over again, as if they echo the joyous bells he's writing about.

From the second stanza:

"Hear the mellow wedding bells,
Golden bells!
What a world of happiness their harmony foretells!"

However, as the poem progresses, we learn that the speaker's mood is not as light as the bells make it seem. The fourth stanza of the poem uses both short /o/ and long /o/ (and /oa/) sounds for a somber tone:

"What a world of solemn thought their monody compels!
In the silence of the night,
How we shiver with affright
At the melancholy menace of their tone!
For every sound that floats
From the rust within their throats
Is a groan."

If you look closely, you can also see the assonant long /i/ sound in "silence," "night" and "affright." There's a reason Edgar Allan Poe is known as the master of mood: he was really a master of sound devices and word choice.

Another example of assonance can be found in Poe's famous work "The Raven." Watch how the short /e/ and long /o/ vowel sounds from the name of the speaker's late wife, Lenore, are found throughout the second stanza:

"Ah, distinctly I remember it was in the bleak December,
And each separate dying ember wrought its ghost upon the floor.
Eagerly I wished the morrow; - vainly I had sought to borrow
From my books surcease of sorrow - sorrow for the lost Lenore -
For the rare and radiant maiden whom the angels named Lenore -
Nameless here for evermore"

There's a brief interlude of long /a/ sounds in "rare and radiant maiden" and "nameless," which reflects the fleeting beauty of Lenore. But the vowel sounds from Lenore's name haunt the speaker throughout the poem, including in the raven's repeated taunt "Nevermore."

Poe exercises his assonant skill again in "Eldorado." Watch the long /o/ sound repeat throughout the first two stanzas of the poem:

"Gaily bedight,
A gallant night
In sunshine and in shadow,
Had journeyed long,
Singing a song,
In search of Eldorado.

But he grew old -
This knight so bold -
And - o'er his heart a shadow
Fell as he found
No spot of ground
That looked like El Dorado."

Like in Poe's other poems, the assonance serves as an internal rhyme. It brings home the goal — Eldorado — by using its vowel sounds throughout the journey.

The Tyger by William Blake

William Blake often uses repetition to set the scene and bring the point across in his poetry. Blake's repetitive use of assonance can be found in one of his most famous poems, "The Tyger." Take note of his frequent long /i/ sounds throughout.

"Tyger Tyger, burning bright,
In the forests of the night;
What immortal hand or eye,
Could frame thy fearful symmetry?

In what distant deeps or skies.
Burnt the fire of thine eyes?
On what wings dare he aspire?
What the hand, dare seize the fire?"

The repeated /i/ sound reflects the "tyger" as the subject of the poem. You may not notice it as you read the poem silently, but when you read it out loud, the /i/ sound ties each of the images together.

Mother to Son by Langston Hughes

Langston Hughes rarely used rhyme or alliteration in his poetry, but there is still an unmistakable rhythm that flows in his words. Take "Mother to Son," for example — in the middle section, he uses both the long and the short /i/ sounds to reflect going up the figurative stairs.

"But all the time
I’se been a-climbin’ on,
And reachin’ landin’s,
And turnin’ corners,
And sometimes goin’ in the dark
Where there ain’t been no light."

The assonance continues in the line "I’se still climbin’" as well. The repeated vowel sound pairs the movement in the poem with the pronoun "I," demonstrating the personal nature of this journey.

The Hill We Climb by Amanda Gorman

Nearly a century after Hughes wrote about climbing an imperfect stair, Youth Poet Laureate Amanda Gorman recited her poem "The Hill We Climb" at the 2021 Presidential Inauguration. Her use of assonance makes the tone and message of her poem resonate even more.

"When day comes we ask ourselves,
where can we find light in this never-ending shade?
The loss we carry,
a sea we must wade
We've braved the belly of the beast
We've learned that quiet isn't always peace
And the norms and notions
of what just is
Isn't always just-ice
And yet the dawn is ours
before we knew it
Somehow we do it
Somehow we've weathered and witnessed
a nation that isn't broken
but simply unfinished"

Gorman brings assonance to a new level by transitioning between repeated vowel sounds, from long /a/ to long /ea/ to long /o/ and short /i/ sounds. Her fluid movement echoes the transitions in American history that she's writing about.

More Examples of Assonance in Poetry

Finding assonance poems isn't a challenge, since so many authors embraced this literary tool to help create rhythm and cadence in their poetry. Consider the following examples by Kelly Roper of LoveToKnow.com.

This short poem uses the long /o/ sound in several different ways. It illustrates the sounds of the wind featured in the poem.

Who knows why the cold wind blows
Or where it goes, or what it knows.
It only flows in passionate throes
Until it finally slows and settles in repose.

The Hero Ants by Kelly Roper

Sometimes assonance serves as the final rhyming sound of the line. Look at this example, where most of the repeated vowel sounds fall at the end of each line.

The ants came upon the cookie crumb feast,
And looked at the crumbs from largest to least.
Their desire for the biggest chunk increased,
So they decided to carry it to their farm in the east.
With a heave and a ho, they lifted their load,
and hoisted it on their backs.
Then slowly, shuffling under the strain,
They began to make their tracks.
Hour by hour, they used their power
And finally made their way,
To their happy little farm full of sandy charm,
Where they were hailed as the heroes of the day.

Some words, such as "grief," are difficult to rhyme with. That's where assonance comes in handy: the poet uses internal assonance to bring unlike concepts together.

Grief creeps in just like a thief and steals all joy away.
It holds it hostage, trapped in bondage,
And turns the world silent and gray.

A Rude Awakening by Kelly Roper

Sometimes repeated vowel sounds can make a poem enjoyable and humorous as well! Check out this fun poem that uses assonance throughout.

The alarm clock's tinkling gave him an inkling
That it was time to wake up.
But he set it to snooze rather than choose
to part from his slumber and lovely dream muse.
The next thing he heard was the sound of a bird -
A rooster calling "cockadoodle doo."
He opened one eye, saw a hint of dawn in the sky,
But decided to ignore that too.
So he slept on the matter until awakened by the clatter
of metal spoon clanging on pan.
"If you don't get out of bed and go to work instead,
I'll serenade you till you're dead," his angry wife said.

The Cat and the Mouse by Kelly Roper

Assonance doesn't have to be used by serious poets with serious subjects only. To finish off the examples of assonance poems, consider this fun little ditty by Kelly Roper on the timeless exchange between a cat and a mouse.

Pawing, clawing, scratching and sawing,
The cat dug into the mouse's hole.
Feeling quite affected and utterly dejected,
He realized the mouse wasn't home.

The Beauty of Poetry

Now that you know how to identify assonance in poetry, you're likely to find it everywhere! Listen very closely to your favorite song and you'll be surprised how often poets and lyricists use assonance. For more poetic inspiration, read these examples of different types of poems. You can also get started on your own poetic masterpiece with these easy tips for beginning poets.