Examples of Bacteria: Types and Infections

Bacteria are the plural of bacterium, which are microscopic one-celled organisms. They are found everywhere and can be harmful, as in bacterial infections, or they can be beneficial, as in fermentation or decomposition. The three main bacteria shapes are coccus, bacillus and spiral. Keep reading for examples of bacteria in each of these three types. 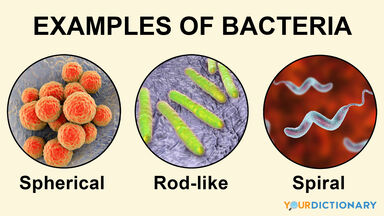 Coccus bacteria, or cocci, are sphere or oval-shaped bacteria that grow in chains or clusters. They cause many bacterial infections in humans, including strep throat (Streptococcus pyogenes). However, some cocci are also helpful to humans, such as the bacteria that make up normal human skin flora (Staphylococcus epidermidis).

Examples of sphere-shaped cocci include:

Bacillus is Latin for "stick," which describes the rod-like shape of this type of bacteria. Bacteria from the genus Bacillus are primarily found in soil and water, and the most well-known example is E. coli (Escherichia coli). Like cocci, they can be identified by arrangement: single cells (bacillus), pairs (diplobacilli) and chains (streptobacilli). Oval-shaped bacilli are known as coccobacili.

Examples of these rod-shaped bacteria include:

While some rod-shaped bacteria can make you very sick, other types can bring your food to the perfect ripeness. Take a look at these bacteria examples that ripen and ferment your food.

Bacteria from the genus Rickettsia are primarily rod-shaped, though some can be spherical like cocci. Rickettsia bacteria are transmitted by regional parasites, such as lice, ticks or fleas. They behave like viruses and can't live outside living cells.

Examples of Rickettsia bacteria include:

Spiral-shaped bacteria are primarily found in standing water. Like Rickettsia bacteria, some types of spiral bacteria are carried by ticks. They typically appear in two main forms: long, rigid spirals (spirilla) and thin, flexible spirals (spirochetes). Take a look at these examples of bacteria in spiral shapes.

Some bacteria have no cell walls, which makes it difficult to classify their shapes as spherical, rod-shaped or spiral. Mycoplasma bacteria are resistant to many antibiotics due to their lack of cell walls, and are the smallest form of bacterial cells.

Examples of mycoplasmas include:

Living in Balance With Bacteria

Now you have seen lots of different examples of bacteria, the types of bacteria and some of the things that bacteria can do. If you're interested in learning more about common bacteria, take a look at these five common eubacteria examples. Or, if you want to prevent some of these bacterial infections, try out these tips on how to kill household germs and bacteria. From there, explore some more fun facts about bacteria.