What is capitalism? It is an economic system in which the means of production and distribution are privately or corporately owned. Operations are funded by profits and not controlled by a state government. Individual rights rule the capitalistic ideal and implementation. Private individuals, small businesses, organizations, and corporations make independent decisions about prices, production and distribution of goods, ideally resulting in a self-regulating market. 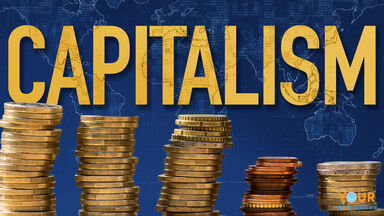 There are many capitalism examples in everyday life. Capitalism is fueled by the profit motive. While private companies have to comply with some government regulation, they are not under government control. They are free to develop and offer any lawful products and to compete via the free market. As you consider these capitalism examples, you'll probably think of many other ways capitalism impacts life as you know it.

Capitalism creates choices for consumers and provides opportunities for entrepreneurs and employees. When competitors are free to enter the market and businesses are free to innovate, this benefits individual consumers and the overall economy. Without capitalism, due to a lack of free-market competition, chances are that prices would increase. If there was only one car manufacturer, they could charge whatever they wanted for cars. Fewer people would be able to afford them, which would limit opportunity and negatively impact many other segments of the economy.

A prerequisite to capitalism is freedom. According to the Index of Economic Freedom, a database that measures economic freedom based upon quantitative and qualitative factors, or regulatory efficiency, the following countries can be considered capitalist countries. Countries are listed in order of those with the greatest quantifiable economic freedom as of 2021.

Crony capitalism refers to situations where a business's success is impacted by strategic influence from civil servants, politicians, or those in authority. Orson Welles' famous film, Citizen Kane, provides a good illustration of crony capitalism. This quasi-biographical film, set in the early 20th century, examines the life of a newspaper magnate (loosely based on several tycoons of the day, including William Randolph Hearst) who bought off politicians in return for favors.

Democratic capitalism assumes pluralism, recognizing that individuals have different opinions and interests, allowing them to associate freely in order to further those interests. Dr. Edward Younkins, author of Capitalism and Commerce, describes three tenets of the democratic capitalist system:

Finance capitalism is characterized by a pursuit of profit from the purchase and sale of financial products such as currency, stocks, bonds, and other derivatives. Lending money at a specified interest rate also comes under the category of finance capitalism.

Laissez-faire capitalism is an offshoot of capitalism where the economy operates under a total absence of rules. Here, the government leaves the people alone regarding all economic activities, with a complete separation of economy and state.

It has been asserted that The Great Depression resulted from a laissez-faire capitalist society. In the time leading up to The Great Depression, massive amounts of money, value, energy, wealth, capital, and power rested in the hands of a very small number of individuals, causing the United States' money velocity to grow at a slower rate.

Mercantilism is an example of an early form of capitalism, dating back to the late 16th century. The premise of mercantilism is that the wealth of a nation is increased through a well-managed balance of trade with other nations. Mercantilism is the mixture of national business interests, state-grounded interests, and imperialism.

The early American colonies practiced mercantilism. Colonists were only allowed to trade with their mother countries, such as Britain or France.

The term social market economy alludes to an economic system where government intervention is minimized. However, the state provides a lot of social services (such as unemployment benefits and social security) to reward labor rights.

Sweden operates under a social market economy. Many citizens consider themselves beneficiaries of the country's complex social welfare infrastructure. Mutual aid and common welfare embody a system that many can benefit from, such as new parents who receive extended parental leave.

There are two forms of state capitalism. With one type, there is private ownership of capitalist enterprises, but the government exerts a large degree of control. In the other type, the state actually fulfills the role of an employer, using services of workers to benefit government interests (such as a federal postal service).

A historical example of state capitalism dates back to the great powers during World War I and World War II. During this time, the government-controlled the inventory and output of production, as seen in Nazi Germany and the former Soviet Union.

To be a truly capitalist society, free market and private ownership rights must remain paramount. As renowned economist Milton Friedman, asserted, "The problem of social organization is how to set up an arrangement under which greed will do the least harm. Capitalism is that kind of a system." However, governmental forces do tend to assert themselves into even a capitalist economy.

When this happens, capitalism in its purest form becomes altered. Varying degrees of capitalism take shape. Around the world, capitalism will always have its supporters and detractors. On one hand, a free market and private ownership can present tremendous economic opportunity. On the other, greed and political corruption sometimes manifest and must be addressed — hopefully through an honest and mindful democratic process.

Expand Your Knowledge of Economics

Now that you are familiar with the concept of capitalism, expand your knowledge and build your vocabulary by learning some basic economic terms. Then, explore other types of governmental and economic systems. Start by exploring examples of socialism. You might also want to consider some examples of communism. Getting a sense of these non-examples of capitalism will help deepen your understanding of economic systems even further.