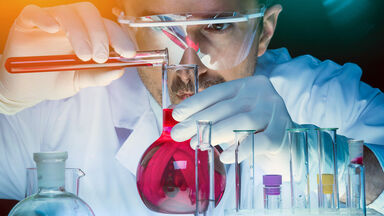 catalyst example in the lab with chemicals
Advertisement

A chemical catalyst is a substance that causes a chemical reaction to happen in a different way than it would happen without that catalyst. For example, a catalyst could cause a reaction between reactants to happen at a faster rate or at a lower temperature than would be possible without the catalyst. There are two main types of catalysts: inorganic catalysts and organic catalysts.

Organic catalysts are known as “organocatalysts.” They consist of nonmetal elements such as carbon, hydrogen and sulfur. Biocatalysts, such as proteins and enzymes, are another type of organic catalyst that are involved with biological chemical processes. Like inorganic catalysts, they still exist in their original form after the reaction is complete.

When the term “catalyst” is used outside of chemistry, it refers to something that causes a social change or reaction to take place. This figurative definition is based on the definition of a chemical catalyst that starts a larger reaction. Some examples of figurative catalysts are:

Catalysts All Around Us

These examples of catalysts show how one action or one person, both in chemistry and in life, can be the beginning of a larger change. It’s important to remember that the catalyst only starts the reaction, and that more reactants are necessary for true change. Take a look at these everyday examples of chemical reactions for more ways that chemistry affects your daily life.