Everything in the world around us is made up of atoms, which are tiny pieces of matter. Different atoms stick together to form all kinds of things in the world. A chemical bond is formed when two or more atoms are attracted to each other and form a chemical compound. 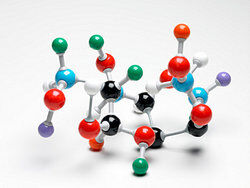 Atoms stick together because of chemical attraction, meaning that various types of atoms are attracted to each other and come together in a bond. This attraction is created because of the electrostatic force caused by the attraction between electrons and nuclei.

There are various types of chemical bonds including:

One type of chemical bond is an ionic bond. Ionic bonds are formed by the electrostatic attraction of atoms that have opposite charges. An ion is an atom that has gained or lost one or more of its electrons in its outer shell, therefore giving the atom either a positive or negative charge.

Ionic bonds are typically formed between one metallic and one nonmetallic atom.

Ionic bonds are created because atoms want to have their outer shells full of electrons; so, when an atom has an outer shell that is not full, it will be attracted to other atoms that have extra electrons.

A covalent bond is formed when two atoms with electronegativities share their electrons, rather than trading them as happens in ionic bonds. Two hydrogen atoms can share an electron to form the molecule H2, and they are joined by a single covalent bond.

A dative bond, also called a coordinate covalent bond, is created when one atom gives both electrons needed to form a single covalent bond.

Sometimes elements will form covalent bonds over and over in a material, repeating the same structure to form very large molecules. When this occurs, the bonds formed are described as a network covalent.

There are several different kinds of chemical bonds that can form; but, the similarity between all of them is the attraction of two atoms.