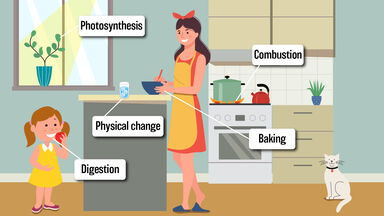 Chemical changes happen all around you, even in your own home. Explore some fun examples in cooking, nature, and your home.

Examples of Chemical Changes in Cooking

When you mix the flour and sugar to make a cake, you might not think it's a chemical reaction at play but it is. Baking a cake is a classic example where a new substance is created from mixing flour, sugar, vanilla, cocoa, and heat. Here are a few other cooking examples.

Do you like caramelized onions? Either way, it’s a great example of a chemical change. In caramelization, the sugar is broken down to create a specific aroma and taste.

Maillard browning is a strange name, but it's how you get that delectable brown crust on your bread and barbecued meat. Maillard browning, named for the chemist Louis-Camille Maillard, is a series of chemical reactions starting with amino acids and sugar.

Cooking isn’t the only place you see chemical changes. From the way that your body digests food to a match burning when you strike it, chemical reactions can be found everywhere. Dive into a few different examples in nature and your home.

Those beautiful colors of fall aren’t happening by chance. They are thanks to chemical changes in the leaves. Typically, leaves are green due to chlorophyll used for photosynthesis. However, before trees take their winter nap, chlorophyll in the leaves breaks down. As the chlorophyll breaks down, the carotene and anthocyanins naturally in leaves all summer long take center stage creating those beautiful red and yellow colors.

One of the key characteristics a chemical change has taken place is odor, which is why people might smell foods to see if they went bad. For example, milk goes bad because of fermentation. This is where the lactose is transformed into lactic acid by bacteria surviving pasteurization.

If you mix an acid, such as vinegar, with a base, like baking soda, you’ll get a chemical reaction. In this case, it starts to bubble. This is a great way to create a homemade volcano.

You never want your car to rust. However, no matter where you live, it’s inevitable. Rust is the chemical change taking place when iron is exposed to metal. Unless your car is made of plastic or in a bubble, it will find a way to rust.