Thoughts and actions don’t always align. When your belief goes against your actions, you will feel conflicted. That feeling is called cognitive dissonance. Investigate cognitive dissonance and positive solutions through examples. You’ll also explore how and by whom the term was coined. 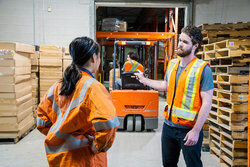 Have you ever felt conflicted about something? For example, you love the environment, but you still use plastic garbage bags. That feeling of mental discomfort about using plastic bags is an example of cognitive dissonance. This is because your beliefs are clashing with your actions or behavior.

You believe that humans need to protect the environment, but you still use plastic bags. The internal conflict that this causes makes you feel bad. Thankfully, there are several ways that people reduce the discomfort of cognitive dissonance.

How Does It Affect Behavior?

Since your body wants to be in harmony, you usually find a way to adjust the importance of your belief and rationalize your behavior. In other words, you may change your actions or your beliefs in an effort to combat cognitive dissonance.

Use examples to understand more about how cognitive dissonance works and positive ways to fix it.

Cognitive Dissonance Examples in the Workplace

A new worker is asked by their boss to change a lightbulb. The worker is given a ladder that is missing a step. Cognitively, the worker knows the ladder is unsafe. However, the worker also wants to please his boss. The worker feels cognitive dissonance about using the ladder.

To positively alleviate the cognitive dissonance, the worker can change the behavior to align with his beliefs. The worker will tell his human resources department that the ladder he was given to change the bulb was unsafe. In order to be able to change the bulb, he will need a new ladder.

A computer programmer is told by his boss to create a hack for a customer. The worker feels cognitive dissonance because he knows that creating the hack is against company policy.

To fix the cognitive dissonance in a positive way, the worker will need to change the behavior to align with policy. He would tell his boss that creating the hack is not possible because it is against policy. He might also tell his human resources manager that he was asked to go against company policy.

Examples of Cognitive Dissonance in Relationships

At a store, a boy sees his friend steal a toy. The boy knows that stealing is against his code of ethics, but he doesn’t want to lose his friend by telling on him. This creates cognitive dissonance between being true to his friend and being true to what he knows is right.

To handle this cognitive dissonance in a positive way, the boy will need to choose between no longer being friends with this person or telling someone about the theft. The second option can alleviate the cognitive dissonance and will probably help his friend out in the long run too.

To create a positive harmony, the woman would need to acquire new information. She might read or study the new town, realizing it really isn’t as small as she thought. There are also a lot of great things about the town. Solving her cognitive dissonance positively leads her to be excited as well.

Marketers are really good at using cognitive dissonance to their advantage. For example:

Don’t settle for the Generic Line. Get the top of the line XYZ Brand dishwasher! Aren’t you worth the best?

Since the price of the XYZ Brand dishwasher is much higher than the generic alternative, you may feel cognitive dissonance because you want the best. But, you might ask at what cost? Many people commonly assume that the more expensive product is “better.”

Many buyers will purchase one dishwasher or the other, and then later feel buyer’s remorse. To avoid that feeling, you would want to research information on both brands to decide which is right for you and your budget. A marketer may also want to provide statistics and demographic data to back up their claims that their dishwasher is the best.

For Festinger, the fact that they were unfazed by their belief being falsified proved his prediction that humans will work to maintain alignment between their behaviors and beliefs. In 1955, he launched a series of experiments to test his theory. And now, you have Festinger to thank for understanding why we feel conflicted in specific situations.

When your thoughts and actions conflict with one another, you will either reject, explain away or avoid the situation to make sure that your body and mind remain aligned. To explore more about psychological theories and how the mind works, read up on operant conditioning.