We often describe something by comparing it to something else. And, when two items are compared, we enter into the land of comparative adjectives. For example, we might say, “This fireplace is bigger than the last one.” When a word ends in -er, it’s a good indication you ’re looking at a comparative adjective.

Other giveaways are the words “more” or “less.” For example, “It’s more expensive to drive a German car than an American car.” Not too difficult, right? Let’s explore several examples of comparative adjectives. 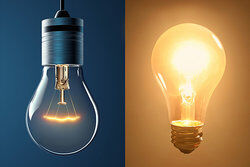 When you have single-syllable adjectives (such as tall), you typically add -er to form the comparative adjective (tall becomes taller). This isn’t universally true, as some multi-syllable words also receive an -er ending, but it’s a good rule of thumb to follow.

In the list below, we’ll start with the root word and then look at its comparative form.

Here are a few examples:

Exception to the Rule(s)

When dealing with root adjectives that are two syllables, you generally place “more” or “less” before the adjective in lieu of the -er ending. Here are some examples:

On a final note, anything with three or more syllables automatically uses the “more” or “less” formula. For example, “important” becomes “more important” and “expensive” becomes “more expensive.”

*There’s a small stipulation to “less.” Depending on the context, you could also say “littler.” For example, “Joan is litter than Sarah.” Typically, we’d use “smaller” in cases like this. A good way to distinguish between the two is to remember it’s “less” if you’re discussing quantity and “littler” if you’re discussing physical size. For example, “I have little time, but you have less time.”

When comparative adjectives are at play, the sentence generally follows this formula:

However, you can make the comparison without using the word "than," as you can see in these example sentences:

You can also add a quantifier to the comparative adjective to show degrees of difference in the comparison:

When using comparative adjectives to describe two items, one or both of those items may be a group. For example:

Does all this leave you wondering more about comparisons? Are you on the edge of your seat wondering how to compare three or more things? The answer to that is superlative adjectives.

These modifiers compare three or more things. Typically, superlative adjectives use -est (instead or -er), and “most” and least” (instead of “more” or “less”). Take a look at these examples:

For more on that, check out these examples of superlative adjectives.