Examples of Concrete Poems: The Beauty of Visual Poetry

Concrete poetry, also known as shape poetry, is defined as a type of poetry that uses some sort of visual presentation to enhance the effect of the poem. While the words, writing style and literary devices all impact the meaning of the poem, the physical shape the poem takes is also significant. Find some famous, and other not-so-famous, examples of concrete poems. 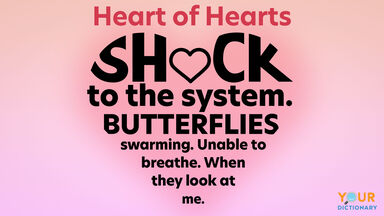 Concrete poetry has its roots in works of literature that are enhanced by a series of images. Many medieval authors sought to couple poetry with images (such as Geoffrey Chaucer in The Canterbury Tales), but the form was lost over time.

Baroque "labyrinth poems" also used words as the lines in a maze, and the mazes themselves would form intricate and often complex images. And, of course, William Blake's "illuminated" works sought to couple the words of poetry inextricably with the beautiful engraved images on a page.

All of this led to the creation of concrete poems. And these types of poems come in two different forms: outline and line poems.

Heart of Hearts by Jennifer Betts

This original poem examines what it's like to fall in love for the first time. When the words are shaped into a heart, you get to the heart of its message.

Shock to the system.
Butterflies swarming.
Unable to breathe.
When they look at me.

Beauty of Trees by Jennifer Betts

Trees contain a muted beauty that you don't often think about. From the elegance of their branches to their sturdy trunks, trees make a perfect subject for a poem like this original concrete poem.

Interested in exploring more about this unique word form that becomes art? Find excellent examples of concrete poems. They make you feel like you're soaring on wings or moving like flowers.

"Easter Wings," by 17th-century poet George Herbert, was originally printed sideways on two side-by-side pages. When held at this angle, you can see the wings take shape.

This poem is a reflection on redemption. The poem begins with a somber tone, but in the curve of the wing, things take a brighter turn with the line, "O let me rise." This is a lovely example of how the shape of a poem can work well with the overall content and theme.

"Lord, who createdst man in wealth and store,
Though foolishly he lost the same,
Decaying more and more,
Till he became
Most poore:
With thee
O let me rise
As larks, harmoniously,
And sing this day thy victories:
Then shall the fall further the flight in me."

Poet Mary Ellen Solt produced stunningly visual line concrete poems in her collection Flowers in Concrete (1966). Each poem focuses on the qualities of the flowers and reproduces the shape in words, letters or whimsical designs, as opposed to the standard structure of describing the flower. They’re quite beautiful.

In "Forsythia," for example, Solt paints a picture that conveys the freedom of flowers gently moving in a breeze. The stems bloom from the letters of the word forsythia, repeating the letters of the base word again in long fronds.

Writers all over the world have experimented with the concrete poem form. Swiss-Bolivian poet Eugen Gomringer was a central figure in the mid-20th-century concrete poetry movement. “Silence,” (which you'll also see as "Schweigen" and "Silencio") one of his more famous works, depicts the concept of silence with a block made out of the word "silence," repeated 14 times with a void in the center.

Silence, in this case, seems oppressive, but the emptiness in the center of the poem might indicate the peace found in the absence of anything at all. Although this poem doesn’t depict an actual image, it uses imagery and words to depict that which is intangible.

The Mouse's Tale by Lewis Carroll

If the modern idea of concrete poetry is a poem in the form of a picture, then Lewis Carroll helped to shape this idea with his poem “The Mouse's Tale.”

In Alice's Adventures in Wonderland, Alice begins talking to a mouse who wants to tell her a "long and sad tale." Alice remarks that his tail (notice the difference in spelling) is rather long, and as he tells his poem, it takes shape on the page in the form of a mouse's tail, long and curled. The original representation of the poem had the words at the end getting smaller as the tail became narrower. See the story of this poem.

"It is a long tail, certainly, ...but why do you call it sad?" And she kept on puzzling about it while the Mouse was speaking, so that her idea of the tale was something like this:—"
"Fury said to a mouse, that he met in the house, 'Let us both go to law: I will prosecute you - Come, I'll take no denial; We must have a trial: For really this morning I've nothing to do.' Said the mouse to the cur, 'Such a trial, dear Sir, with no jury or judge, would be wasting our breath.' 'I'll be judge, I'll be jury,' Said cunning old Fury: 'I'll try the whole cause, and condemn you to death.'

Within his poem, ”O sweet spontaneous," E. E. Cummings creates a winding trail. However, he's painting a picture of a world used and abused by the people that inhabit it. Overall, E. E. Cummings is sharing his love for mother nature and how humankind is destroying it. See an excerpt of this poem.

"O sweet spontaneous
earth how often have
the
doting

In a Station of the Metro by Ezra Pound

Ezra Pound was a poet involved in the imagist movement, which sought brevity, clarity and imagery through short works. “In a Station of the Metro” is considered by many to be a concrete poem due to its focus on visual spacing, which enhances the poem. This work is extremely short and contains no verbs whatsoever, which provides the reader with an immediate concrete image, like a photo snapshot of a train going by.

The poem was originally printed with large spaces within the two lines intended to give the impression of train tracks and reinforce the poem's rhythm. Pound implicitly compares the image of faces walking through the station with a beautiful image of nature, underscoring the beauty of even this insignificant event.

"The apparition of these faces in the crowd:
Petals on a wet, black bough."

Other Concrete Poems to Explore

As you've probably guessed, concrete poems can be created about practically any subject matter, and they have been created about a wide variety of objects. In some concrete poems, it’s easy to see why the author chose a specific image. Perhaps it aligns with the words, adding to the creativity and free spirit behind the movement.

Other times, the reader must look deep into the text to reveal the image. That’s where an appreciation for this art form starts to take shape. Try out some other concrete poems to read, examine and analyze.

In his poem, “Idea: Old Mazda Lamp, 50-100-150 W," John Hollander explores the interweaving concept of light and darkness. The poem creates an outline of a lightbulb. However, the metaphor Holland is presenting extends beyond light and dark to thought. It represents the lightbulb that clicks when someone understands a concept. Examine an excerpt of this poem.

Vision and Prayer by Dylan Thomas

Explore the expanse of life, death and religion in Dylan Thomas's ”Vision and Prayer.” The beginning of Thomas's poem starts out as a prayer but it becomes more of a lament. The repeating image of the rhombus and the hourglass pushes the form and rhyme of the poem forward. Overall, the poem is a prayer for a baby that is born blind, but it's actually more of a criticism to society. See a small excerpt of this poem.

”Uplifting” by Robert Yehling takes concrete poems to another level by making a combination between a concrete and acrostic poem. While the poem itself creates a nice uplifting shape, the first letter of each line spells out the name of the poem.

"Upon a glade of sun-sculpted
Pine forest, rooted in stone,
Layers of my bark peel away,
Inviting a softer surface to emerge. I climb
Far into the sky, following an eagle’s current
To the sun–
I melt into my sculptor...
Nestled by Her vision, I hear a new call:
'Go back to seed, and I will bring you Home.'"

If you’d like to try your hand at a concrete poem, it’s important not to try to force the image. Write down some words and play with them. Remember, it might take a while before those words can truly come to life in a shape.

Also, don't feel constricted by others' perceptions of reality. For example, if you were writing about a box, you could add vertical lines throughout the length of the box to represent a prison and how "thinking inside the box" essentially keeps a person's mind trapped. For a little more guidance, enjoy these tips on writing poems.