Conduction is the movement of heat or electricity through a material without any perceptible motion of the material. Discover more details about real-life conduction and review some examples of conduction. 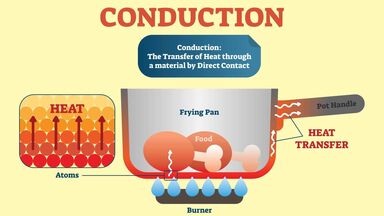 Conduction is one of the ways that heat can transfer from one place to another. Conduction occurs when energy is transferred from one atom or object to another. It takes place through either heat or electricity. Conduction can occur in liquid, gaseous or solid objects.

When conduction occurs, it doesn't cause the object(s) to move in a way that people can perceive. This is because conduction does not cause materials to be displaced.

Heat conduction and thermal conduction mean the same thing. As molecules heat up, they begin to vibrate, which causes them to transfer kinetic energy to other molecules they come in contact with.

There are many additional examples of heat conduction beyond the ones listed above.

Electrical conduction occurs when particles that are electrically charged move through some type of medium to produce electrical energy.

Materials that Are Good Conductors

More Ways Heat Can Be Transferred