Consonance is defined as a pleasing sound caused by the repetition of similar consonant sounds within groups of words or a literary work. This repetition often occurs at the end of words, but may also be found within words. When consonant sounds are repeated only at the beginning of words, that is called alliteration rather than consonance. Discover several consonance examples in sentences, phrases and poems. 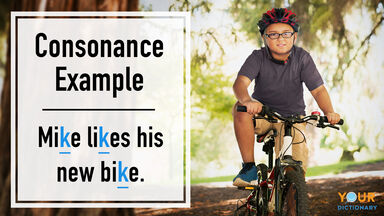 Examples of Consonance in Sentences

The sentences below illustrate how consonance can be used as a literary device within complete sentences.

Consonance examples aren't found only in complete sentences. You can also find them in phrases, such as the word pairs listed below.

Examples of Consonance in Poems

Consonance is a popular literary device used by poets. Consider these examples in well-known popular poems.

The Acrobats by Shel Silverstein

The "ng" sound and the "z" sound are repeated in Shel Silverstein's "The Acrobats."

"I'll swing by my ankles.
She'll cling to your knees.
As you hang by your nose,
From a high-up trapeze.
But just one thing, please,
As we float through the breeze,
Don't sneeze."

'Twas Later When the Summer Went by Emily Dickinson

In Emily Dickinson's "'Twas Later When the Summer Went," the "w" sound is the most prevalent example of consonance. There are a few other repeated consonant sounds, including "m" and "p."

Stopping by Woods on a Snowy Evening by Robert Frost

In "Stopping by Woods on a Snowy Evening" by Robert Frost, the "s" sound is the best example of consonance. The poem also repeats the "p" sound a few times.

"He gives his harness bells a shake
To ask if there is some mistake.
The only other sound's the sweep
Of easy wind and downy flake."

The repetition of the "r" sound in the poem "Invitation" by Shel Silverstein is an excellent example of consonance in poetry.

Arms and the Boy by Wilfred Owen

In "Arms and the Boy" by Wilfred Owen, you can see line-by-line consonance. The "b" sound is repeated in the first line, "n" in the second line, "m" in the third line, and "f" in the fourth.

"Let the boy try along this bayonet blade
How cold steel is, and keen with hunger of blood;
Blue with all malice, like a madman's flash;
And thinly drawn with famishing for flesh."

Shall I Wasting in Despair by George Wither

Consonance abounds in "Shall I Wasting in Despair" by George Wither. The "l" sound appears at least once in all but the last two lines. The repetition of the "sh" sound at the beginning of several words in this poem illustrates alliteration.

"Great, or good, or kind, or fair, I will ne'er the more despair;
If she love me, this believe,
I will die ere she shall grieve;
If she slight me when I woo,
I can scorn and let her go;
For if she be not for me,
What care I for whom she be?"

From Consonance to Assonance

These different consonance examples in sentences, phrases and poems all show how consonance gives a pleasing sound and creates a special mood in everyday writing as well as in literature. The benefits of such repetition are not limited to consonant sounds. Review these examples of assonance to get an idea of how repeated vowel sounds can be used as a literary device. Then, explore an overall comparison of consonance, assonance and alliteration.