Examples of Control Groups in Experiments and Research 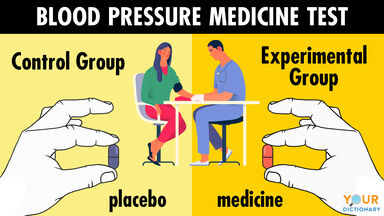 Why Are Control Groups Used in Experiments?

A control group is used in an experiment as a point of comparison. By having a group that does not receive any sort of treatment, researchers are better able to isolate whether the experimental treatment did or did not affect the subjects who received it.

Control groups are commonly used when pharmaceutical companies test new medications for physical health or psychological health. Subjects are screened to ensure they are appropriate candidates for the experiment. Those who are accepted to participate are randomly assigned to either an experimental group or the control group.

In a test of anxiety treatment, one group attends individual therapy sessions and receives a new medication. The control group receives only an inert pill.

If a treatment for drug addiction is being tested, people who have similar addictions will be recruited to participate in the study. One group will be given a treatment while the control group is given the placebo.

Doctors who are studying a weight loss drug will recruit volunteers that meet specific requirements for their study. For example, they may seek participants who are in their thirties and are at least 50 pounds overweight. The control group receives a pill pack that looks exactly the same as the packet that the others received, but the control group's pack is a placebo.

Psychiatrists are testing the effectiveness of a proposed ADHD drug. They recruit parents who are willing to allow their child to be a part of the clinical tests. All of the children are between the ages of 9 and 14 and have been diagnosed with ADHD. The psychiatrists involve the parents and the teachers in questionnaires throughout the process but only one group has the pill that is being tested while the other group of children is given a sugar pill.

Tests are being run to determine whether a newly developed medication can help to ease the effects of Post Traumatic Stress Disorder (PTSD). Researchers may seek to recruit volunteers within a certain age group or background who suffer from PTSD and divide them into an experimental group and a control group. Control group members receive what appears to be the same medication as those in the experimental group, but is only an inert pill.

The procedure of testing the effectiveness and safety of cosmetic products and treatments also relies on experimental research methodology. As a result, control groups are typically included in this type of research.

A new treatment for hair loss in men would be tested using an experimental group that receives the treatment and a control group that is administered a placebo. Men of the same age range with similar hair loss would be recruited to participate in the study. One group receives an application with the active ingredient while the control group receives an application that appears the same but does not have the active ingredient in it.

Researchers who test anti-wrinkle facial products would follow a similar approach. They would recruit volunteers all within a specified age range of 38-45 and distribute bottles to all of the subjects. While the bottles would all appear to hold the same product, those who were randomly assigned to the control group will receive bottles that do not have the compound that is intended to reduce wrinkles.

A cosmetics company that has developed what they believe to be a long-lasting lip color product would need to test the product before releasing it to the market in order to be able to substantiate their claims.

Study participants would be divided into experimental and control groups, with those in the experimental group being assigned to use the new product for a set period of time and record data about how long it lasts. Those in the control group would be provided with lip color not made with the new formula, and would be asked to record the same data as the other group.

Control groups aren’t always tied to testing new medicines or cosmetic products. Control groups can have business applications beyond being used to test the effectiveness and safety of products developed in a scientific laboratory. This approach is often used to make decisions about investing in training or adjusting business practices.

If a company’s leaders are interested in discovering whether training will impact employee productivity, the organization might use a control group. For example, if a manager wants to know if a sales training program will lead to an increase in sales, the salespeople could be randomly assigned to an experimental group that attends that training and a control group that does not participate in the training.

The company would evaluate sales numbers and other performance related data at appropriate intervals after the experimental group completes training to determine if those who attended the program performed better than those who did not.

For companies looking to streamline business processes, tweaking the way things are done and comparing the results against a control group can be beneficial. For example, if a business currently requires three rounds of interviews before making a job offer, but is considering cutting back to two rounds, an experiment could be helpful.

Open positions could be assigned to a control group that will continue as usual. Positions assigned to the experimental group would be filled using the proposed new procedure. If data reveals that taking away a round of interviewing doesn’t decrease quality of hire, the company will likely move forward with the change.

Control groups are critical to the scientific method. Experimental research design depends on the use of treatment and control groups to test a hypothesis. Without a control group, researchers could report results specific to study participants who received a treatment, but they would have no way of demonstrating that the treatment itself actually had any impact.

By including a control group to use as a point of comparison, researchers are better able to isolate the effects of the treatment. Being able to report on the difference (or lack of difference) between the control and experimental groups is very important to ensuring that conclusions drawn from the study are valid.

Now that you are more familiar with what the control group in an experiment is and have reviewed some examples of control groups, you’re ready to learn more about research methodology. Start by exploring the difference between parameters and populations in studies.