Convection occurs when heat is transferred through a gas or liquid by the hotter material moving into a cooler area. Discover what convection really is and review several examples of this phenomenon. 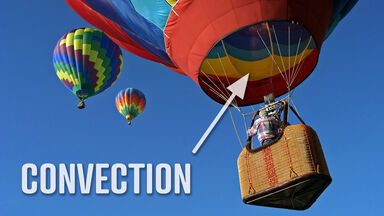 It’s important to understand convection’s definition before considering examples, so you’re clear on what convection really is. Convection is a transfer of heat related to the movement that occurs within a fluid due to the rising of hotter materials paired with the sinking of colder materials. This occurs because hotter materials have less density than colder ones.

In meteorology, convection is the transfer of heat and other atmospheric properties by the movement of masses of air, particularly in an upward direction. In geology, it is the slow movement of material below the Earth's crust. Some convection is manmade.

There are numerous examples of convection in everyday life, including several common household occurrences.

Many weather conditions are the result of convection. From a meteorology perspective, convection is just an upward motion of air in the atmosphere. This sounds simple enough, but it can lead to severe weather in certain conditions.

While the impact of geological convection isn’t something that people can observe in real time, it greatly affects the natural world. A number of natural phenomena are related to convection related to geology.

While stars are not below the earth’s surface, you can also see the principles of convection at play when considering convection associated with stars, which can also be referred to as stellar convection. A star has a convection zone where energy is moved by convection. Outside the core is a radiation zone where plasma moves. A convection current forms when the plasma rises and the cooled plasma descends.