Examples of Cultural Diffusion in the World Around You

Cultural diffusion is the spread of cultural beliefs and social activities from one group of people to another. Through cultural diffusion, horizons are broadened and people become more culturally rich. 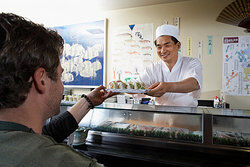 Man getting sushi as examples of cultural diffusion

For example, a woman living in Manhattan might purchase mala prayer beads used by Buddhist monks to focus on a breath or mantra. Her use of those beads, incepted halfway around the world, is now positively impacting her daily practice of meditation. Had she only ever walked the streets of Manhattan, never engaging with any product or activity outside her borders, life would be very different. Also, if it weren't for cultural diffusion, that same woman wouldn't be able to enjoy sushi night every Thursday evening with her friends!

The mixing of world cultures through different ethnicities, religions, and nationalities has only increased with advanced communication, transportation, and technology. Folks living in Australia can communicate daily via Twitter, Facebook, or Instagram with someone living in Russia. This enrichment allows us to open minds, and learn as much as we can from every corner of the earth.

Let's expand our horizons beyond those sushi dinners and daily tweets with some examples of cultural diffusion in society today:

For many cultures, religion has always been an integral part of life. (You'll find a number of remarkable studies examining parallels between Buddhism and Christianity.) And this is the true beauty of cultural diffusion, that expansion of the mind. Through a friend or acquaintance from another faith, we stand to learn a lot more and live our best lives yet.

Let's take a look at cultural diffusion at work in religious circles.

They say knowledge is power. And, when one group of people develops an important element of technology that can benefit people across the globe, it's nice to see that information-sharing take place. Of course, in today's world that can happen at lightning speeds.

Let's take a look at technological diffusion through the years.

Even before the Middle Ages, when merchants traded their goods by traveling from region to region, the benefits of cultural diffusion were apparent. If one region didn't have the climate to produce one crop, another did, and those goods were diffused across countries and nations. One good was traded for another and communities enjoyed the benefits of varied products. Sure enough, that benefit remains today, as world trade continues to boom.

Let's take a look at the economics behind cultural diffusion.

In the end, cultural diffusion can be life-changing. When an American woman in Wisconsin enrolls in salsa classes taught by an Argentinian man, they might forge a lifelong friendship that would've never happened if cultural diffusion wasn't a part of our reality.

As a man living in Los Angeles watches YouTube videos on how to make his own sushi, he reaps the benefits of a healthy lifestyle offered by the Japanese culture. One remark in the comments section might introduce him to a Japanese chef, and there you have it. A new friendship is formed and added morsels of knowledge are exchanged.

They say travel expands our minds and introduces us to undiscovered worlds. Cultural diffusion, however, is a little more permanent and steadfast. The learning opportunities continue, as entire communities of people exchange ideas, goods, and knowledge. If America's a melting pot, then we're sure to be on the winning side of cultural diffusion.