A modifier changes, alters, limits, or adds more information about something else in the sentence. Ideally, a modifier comes right before or right after the word it modifies. When that other word is missing, the modifier becomes a dangling modifier, making the sentence unclear. Keep reading for dangling modifier examples, explanations for why they happen, and how to fix them in your writing. 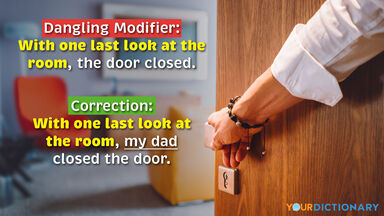 When a present participial phrase isn't followed by the noun it's modifying, the resulting sentence just doesn't make sense. Unlike a misplaced modifier, the subject isn't in the wrong place — it's just gone.

You'll also find past participial phrases without their subjects. You have a few options for correcting these modifiers, all of which involve some rewriting.

The phrase "tired of my lateness" modifies the teacher, who is missing from the original sentence. You can fix this dangling modifier by making the teacher the subject of the sentence.

Example #3: Waiting for the Elevator

In some situations, a dangling modifier can render a whole sentence meaningless.

Elevators can't stand in line. Logically, it's "people" who are stuck standing in line, but with the way this sentence is structured, grammatically that phrase must refer to "the elevator," making the sentence nonsensical. Changing the direct object "people" to the subject "we" and adding a prepositional phrase ("for the elevator") clears up any misunderstanding.

The past participle "unbeaten" is left dangling here, apparently modifying the noun "the regular season championship." Since championships can't be unbeaten, the modifier is dangling. Reordering the sentence clarifies who is unbeaten (the Wildcats).

Starting sentences with prepositional phrases is also an effective way to vary your sentence style. They can modify nouns, or they can function as adverb phrases to modify a verb. However, they need to come right before the words they modify to avoid becoming dangling modifiers.

Prepositional phrases provide more information about a noun in the sentence. The trick is to make sure the noun it's modifying is obvious.

We are left wondering exactly who read the great new book. The phrase can't possibly be modifying the movie, since the movie can't read. Adding a subject (Anna) allows the reader to know who has read the book.

The door didn't take one last look at the room, but who did? Adding "my dad" (or another subject) to the sentence makes it clear who is actually performing the action in the sentence.

Sometimes you'll find a dangling modifier at the end of the sentence.

The car's engine didn't fix its own transmission. Adding "my sister" as a subject is a good way to correct this dangling modifier. Since prepositional phrases should be closer to the subject they modify, moving "by fixing the transmission" to the front of the sentence also helps you avoid fixing a misplaced modifier.

Adjectives are the most common types of modifiers. For example, "The big" doesn't make sense without telling what is big, which leaves "big" as a dangling modifier. However, "the big dog" is a complete phrase. Adjectives and adjective phrases can become dangling modifiers when they don't have anything to modify.

Starting your sentence with an adjective is an effective stylistic choice. But if the noun it modifies is missing, you've got a dangling modifier.

Unless your story is about an amusement park that is self-aware, you need a subject to be "heartbroken." Adding "the children" into the sentence clarifies what you're trying to say.

Adjectives are a great way to give compliments to someone. But be sure that that person comes right after your adjective, or you may accidentally give that compliment to yourself!

Who exactly is "wonderfully talented" here? Adding the subject "the architect" to your sentence helps the reader understand exactly who you're talking about.

Check out one more example of an adjective phrase that's missing a subject. It conveys a much different message than the writer intends.

Surely Jana isn't the "small but expensive" noun in this sentence! Adding "the house" as the subject to the sentence keeps this adjective phrase from being a dangling modifier.

Dangling by a Thread

Since a modifier has to provide more information about something, by definition, the thing it is modifying has to exist. It seems pretty obvious and intuitive when written in a simple sentence. However, sentences aren't always simple. Take a look at different sentence variety examples you can use that may result in dangling modifiers. You can also check out the 18 most common grammar mistakes that may be affecting your writing.