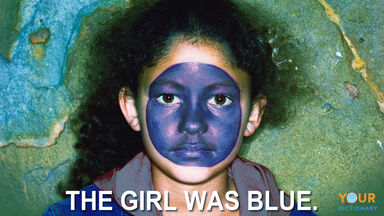 The most common type of denotation that you’ll come across is in literature. Denotation means the literal definition of a word. To give an example, the denotation for blue is the color blue.

The girl was blue.

You mean the girl was quite literally the color blue.

You are a dog.

You mean that the animal is literally a carnivorous domesticated animal with fur and a snout.

Still a bit confused? Look at these denotation sentence examples.

When you take the literal meaning of a sentence, it can get pretty funny. For example, imagine if someone said,

He has a lot of dough.

As a denotation, it means they are up to their elbows in dough and ready for baking. Denotation can easily get confused with connotation. Therefore, it is important to look at connotation vs. denotation.

While denotation is the literal meaning of the word, connotation is a feeling or indirect meaning. For example:

Depending on whether you are using connotation or denotation, the sentence, “She was blue” could mean she was literally blue or she was sad. Here’s another example to really drive this home.

Again the sentence, “You are a dog” could have two different meanings. You are saying they are an animal or ugly. Knowing whether a writer is using connotation or denotation depends on the text surrounding the passage. Let’s check out a few literary examples.

From poets to novelists, denotation is used all over the literary world. Explore a few different examples.

In his passage, Wordsworth means actual flowers when he talks about “golden daffodils." Additionally, in the phrase “beside the lake, beneath the trees” the lake and trees are taken by their denotative meanings.

"When all at once I saw a crowd,
A host, of golden daffodils;
Beside the lake, beneath the trees,
Fluttering and dancing in the breeze."

To Kill a Mockingbird by Harper Lee

In this passage from To Kill a Mockingbird, Atticus means courage in the literal sense. The author is using denotation to find courage as “strength or bravery in the face of adversity or pain."

"I wanted you to see what real courage is, instead of getting the idea that courage is a man with a gun in his hand. It's when you know you're licked before you begin, but you begin anyway and see it through no matter what."

In the book series Harry Potter, Hagrid refers to Harry as a "wizard." This is a use of denotation because Harry is actually a wizard, as in the magical being. Hagrid was not using this as a connotation to mean Harry was smart, but that he's an actual wizard.

In this excerpt from the novel, Hemingway is using the literal meaning of expatriate or "someone living outside their home country." The main character, Jake Barnes, is an American living in Paris.

"You’re an expatriate. You’ve lost touch with the soil. You get precious. Fake European standards have ruined you."

There are other literal meanings of words or phrases that can be denotations. Explore a few fun examples.

Symbols have important denotations or literal meanings. They are often used as math symbols but could be used for other purposes. Check out common examples.

Examples of Denotation in the Zodiac

Zodiac denotations are important to know your signs. Explore the denotations of zodiac signs where the name of the sign literally means a specific range of birth dates.

Getting Literal With Denotation

You’ve had a little fun with denotation. While it might seem denotation just has a few examples, as you can see, denotation meanings cover several areas and examples. Now that you’ve got a good grasp on denotation, you might want to take a look at connotative words and examples.