Examples of Density for Substances & in Real Life

Density is the measurement of how tightly or loosely a given substance is packed into a given volume. Air, for example, is low density, much lower than human tissue, which is why we can pass through it. The same does not apply to granite. Don’t try to walk through granite. It’s bad for you. 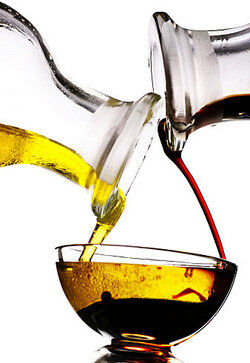 Density is one of the basic properties of physical science. Physics, chemistry, and even biology require a clear understanding of what density is and how it’s calculated.

Density is calculated according to the simple formula:

That is, density (p) is equal to total mass (M) divided by total volume (v). This formula can be used to determine the density of any substance. Common units for the measurement of density include grams (g), milliliters (ml), or grams per cubic centimeter. For instance, if there are 50 grams of a given substance within a cubic centimeter, that unit’s density is 50g/mm3.

Density can vary according to temperature and pressure. Applying pressure to an object decreases volume, which then increases density. Increasing the temperature of an object almost always decreases its density by increasing its volume.

By heating the bottom of a volume, especially a fluid volume such as a liquid or gas, convection causes the substance to rise, thus increasing the volume. The temperature variation is typically minor in solids and most liquids, but much greater in gases. The abbreviations to know are:

These standardized pressures and temperatures make it possible to confirm equal densities are being used regardless of the application.

Substances and Their Density

The following are examples of the density of various substances in grams per cubic centimeter, as measured at room temperature and 1 atmosphere of pressure (NTP).

The density of gases is strongly affected by pressure and temperature. These have all been measured at room temperature and 1 atmosphere of pressure. Results are presented in gram per cubic centimeter.

Density is one of the fundamental physical properties of any substance. Understanding what it is and how it’s calculated is crucial in virtually every scientific field, particularly materials science, engineering and any discipline related to manufacturing.

Did you know the reflective property of a surface is called its albedo, and that some surfaces have an albedo so high they’re dangerous to look at? For more facts and fundamentals, read through these examples of physical properties and examples of scientific notation.