Discrimination is the ability to distinguish differences between people or things. When you discriminate against something, you often treat it as inferior or worse in some way. 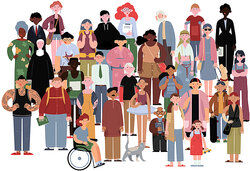 In life, there are ways to create "distinguishing differences" between nearly everything. We can discriminate between fiction and nonfiction, walks in the park and walks on the beach, or people, places, and things. Still, let's examine some of the most prevalent forms of discrimination:

In 2010, the Equality Act was enacted in the United States. It's a legal framework that outlines clear, distinct laws tackling discrimination. Many of the protected characteristics are listed above, including age, disability, gender, religion, and sexual orientation.

Is Discrimination Ever Okay?

By and large, discrimination carries a negative connotation. However, it isn't entirely bad. We positively discriminate (or make distinguishing differences) between senior citizens and children when we offer discounts on their movie ticket prices.

What About Bias and Prejudice?

Bias, prejudice, and discrimination are all related, with slight differences. Each one has a negative connotation, but that's not entirely accurate. Bias is a tendency to lean in a certain direction. You can be biased toward a group of people or biased against Cheerios. For more on this, check out examples of bias.

Prejudice tends to get a little bit uglier. This is a feeling toward someone based solely on their affiliation with a group. Prejudice tends to take root in ignorance, as it's hard to judge someone's character simply because of one aspect of their life. To dive deeper into this facet of human nature, read through these examples of prejudice.

Let's focus on the positive. Sure, we see a lot of discrimination in this world based on ugly thoughts and feelings (prejudices). But, we can also discriminate in an effort to live a better life. Together, let's discriminate against the "easy way out" in life, choosing instead to work hard and achieve great things.

You know what will make your work appear superior and top-notch? Fantastic grammar. While you're here, take a look at these 11 Rules of Grammar. See how many of them you're already familiar with and how many you'll implement in tomorrow's emails.