Examples of Double Negatives: From Sentences to Lyrics 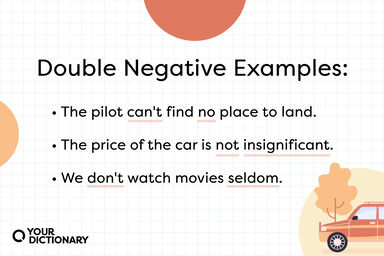 three sentence examples from the article that include double negatives
Advertisement

To better understand why you should generally try to avoid these sorts of sentence constructions, here are several examples of double negatives that illustrate how they can be confusing or sound nonsensical.

When it comes to sentences with double negatives, you'll most often find the word "not" (sometimes in a conjunction like don't or can't) or the word "no." Sometimes, a negative can also be formed by attaching a prefix like ir-, in-, non- or un-. Here are some examples in sentences:

You can usually simplify sentences like these by replacing the double negative with a positive, all without losing the meaning. Instead of, "The evidence is certainly not irrefutable," you can say, "The evidence is refutable." Remember that "positive" here refers to stating what something is, whereas "negative" refers to stating what something is not.

You can create a double negative by using a negative word with a word that acts like a negative, such as some adverbs, pronouns or conjunctions. These types of sentences typically involve words with a connotation of being lesser or very low in quantity or degree. Here are some examples of negative adverbs used incorrectly to emphasize the negative of the verb:

Song lyrics are much like many types of poetry in that they don't have to follow standard grammar rules. The creative breaking of convention allows for a wider range of expression, even if double negatives are used to achieve desired syllable counts in lyrics. Here are some well-known lines in popular songs with double negative examples.

Won't Do No Good

Unless you're leveraging double negatives for poetic effect, it probably "won't do you no good" to include them in either your formal or informal writing. Instead, you should strive for clarity and understanding. Check out Double Negative Trouble for more on the right and wrong use of double negatives and to test your knowledge in our quick quiz. You "couldn't hardly wait" to see more, right?