Doublespeak is the complete opposite of plain and simple truth. It distorts words and phrases, often in order to conceal the truth. For example, if a pharmaceutical company said something like, "There are some minor side effects," when they should clearly be stating, "This drug may cause a heart attack," they're using doublespeak and communicating in a deceptive manner. 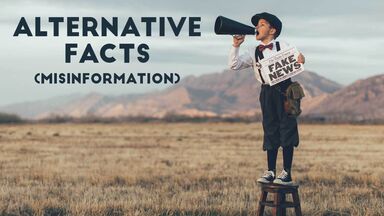 Doublespeak is communicating in a way that misrepresents or obscures the truth. It combines both sense and nonsense in a deliberate effort on the part of the message sender to conceal the true meaning of what is being said. In some cases, doublespeak is used to soften the impact of what the message sender is describing, but is more often used to camouflage the truth.

There are different types of doublespeak. Most doublespeak can be classified as euphemism, gobbledygook, inflated language, and jargon. Review a selection of doublespeak examples, organized by type.

Euphemisms are a type of doublespeak that attempts to make certain situations seem more palatable. They are used to soften a blow rather than to hide the truth. They're evasive, but not usually malicious. Calling someone's home "quaint" can be a nice way of saying "small." The speaker is being polite, but not purposefully distorting or evading some major truth. There are many examples of euphemism.

Sometimes referred to as puffery, inflated language uses over-the-top language to make things seem better than they are. A person who uses inflated language might be trying to impress others. Companies often use inflated language in marketing claims. Those who seek to influence public opinions tend to use extreme terminology in a way that's not really accurate.

Jargon can be described as terminology commonly used in a particular occupation, industry or another group. The terms are known and understood by group insiders but can represent doublespeak when used by others. There are many examples of jargon.

Gobbledygook involves speaking in a convoluted way that is so confusing as to be incomprehensible. It often pairs nonsense with information that would make sense on its own or combines other types of doublespeak with additional confusing or deceptive messages. Gobbledygook tends to include big words — many times used incorrectly — and long sentences that are difficult, if not impossible, to follow or understand.

People use and are exposed to doublespeak all the time. There are examples of euphemism in literature, so students are exposed to it in their English classes. Workplace jargon is commonplace in just about every place of business. Newscasts incessantly use examples of political jargon, while interviewees often speak in gobbledygook. Information reported in the news or shared via social media often uses the inflated language of yellow journalism.

The purposes of doublespeak are varied. Since this is a human tactic, it's going to be complex and multi-faceted. That said, it's generally something to be avoided. Let's take a look at some of the root causes.

To Be Politically Correct

Take that whole "violent extremism" tactic for example. The Federalist published a piece on this term, citing it as doublespeak that is blinding us to reality. There lies the central theme behind doublespeak. It blinds the recipient to the truth, to reality. An isolated case of violent extremism is hardly the same as organized terrorism intended to instill high levels of fear and cause multiple deaths.

When someone uses the term "gently used", what are the odds they're being honest about that? Does the product only have mild wear and tear, or is it on its last legs? If you're buying a second-hand Louis Vuitton jacket and the retailer says it's gently used because the prior owner only wore it once to the opening of her art gallery, then it's just a nicer way of saying, "not brand new". However, if we're talking about a used car that's prone to overheating, stalling, faulty wiring, and a bad engine, "gently used" is a misrepresentation of the truth.

As much as politicians are guilty of doublespeak, so are advertisers. In fact, the makers of OxyContin once used enough doublespeak to land themselves in very hot water. When they first launched their marketing campaign, they stated that opioid addiction concerns were "overblown" and their new opiate-based medication was "much safer than other alternatives". As indicated by the company's 2020 settlement with the United States Department of Justice for more than $8 billion, plus other penalties, this claim was far from true.

When a company COO says he's "reducing costs", you might think, "Darnit. I guess we're not going to see freshly made coffee in the kitchen anymore." However, it's not likely that's what the term meant. More often than not, "reducing costs" turns into layoffs, pay cuts and a loss of benefits. If that employer had just spoken with the truth, his employees might have been able to better prepare for sudden losses.

Think Before you Doublespeak

If you ever find yourself on the precipice of doublespeak, stop! Are you sure you want to use murky, evasive tones that the recipient may not appreciate? It's one thing to use a euphemism or two to soften a blow or sound more polite. "I have to use the restroom" isn't misinforming anyone or hiding a mistruth. It's simply rounding out rough edges. However, trying to sell someone a "gently used" hunk of junk is doublespeak in its prime. Whenever you're faced with a situation where you feel like doublespeak is an option, there's likely a greater issue at hand that needs to be addressed. Perhaps it would be better to embrace the cold, hard truth. Instead, learn how to properly use rhetoric as a tool to motivate and persuade others.