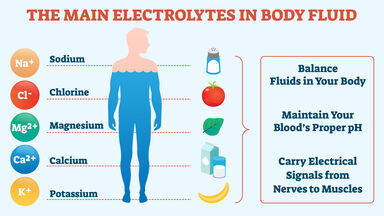 Electrolytes are examples of minerals. They are distinguished from other minerals in that they carry an electrical charge when dissolved in water. Humans and animals alike need electrolytes for their bodies to function. Electrolytes can be found in blood, urine, other bodily fluids, and tissues.

Importance of Electrolytes to the Body

An electrolyte imbalance can be caused by anything that disrupts the balance of water in the body. For example, sweating due to heavy exertion can cause electrolyte levels to become low. This is why athletes and those who exercise vigorously can benefit from electrolyte-containing drinks, such as Gatorade and Powerade. Other common causes of electrolyte imbalance include diarrhea, vomiting, kidney function issues, and medications that cause one to retain or lose water.

Examples of Electrolytes in the Body

The body needs a number of electrolytes. Eating foods or drinking beverages that have these substances is the primary way that people or animals take in the electrolytes they need.

The electrolytes that tend to be present in the bodies of humans and animals are not the only ones that exist. Many chemical compounds are electrolytes and can be used for a variety of purposes. Some are food additives while others are substances used in industrial applications. Many should not be consumed or even touched directly.

Learn About Substances the Body Needs