While death is one of the constants of life, everyone deals with it in different ways. Poets might express their grief with an elegy, a poem that mourns someone’s death and celebrates their life. 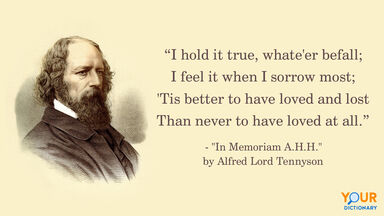 What Is an Elegy?

An elegy is a poem or song that serves as a lament for or a celebration of a deceased person. The elements of an elegy reflect the stages of loss. Some focus on grief while others commemorate the life and achievements of a person. Still other elegies are about solace and coming to terms with someone’s death.

The word elegiac has two meanings. As an adjective, it means “in the style of an elegy” and is used to describe the type of poem. In its noun form, an elegiac refers to verses that are arranged in an elegiac meter or couplet. The elegiac couplet was a poetic form used by the Ancient Greek and Roman poets to contrast rising action in the first verse with a falling quality in the following verse.

History of the Elegy

In Ancient Greece, the word elegy referred to any verse written in elegiac couplets; they covered a broad range of subject matter, including death, love, war, and more. The elegy became a popular subgroup of pastoral poetry, attributed to the poet Theocritus in his Idylls. In the 1st century B.C., the Roman poet Propertius composed a collection of elegies, appropriately entitled Elegies. Around the same time period, another Roman poet, Ovid, composed several books of elegies including Amores, Heroides, Tristia, and Epistulae ex Ponto.

While elegies have been around for thousands of years, the elegiac form did not really begin to shape into what it is today until the 16th century. While elegies covered a wide range of topics in ancient poetry, in modern literature an elegy is specifically a lament for a deceased person or a tragic event.

Some famous authors and poets have written elegies to commemorate their loved ones and even other poets.

"Lycidas" by John Milton was written in memory of Milton’s friend Edward King, who drowned in 1637. Milton adheres to the ancient Greek tradition of memorializing a loved one through pastoral imagery. The name Lycidas also harkens back to Ancient Greece and appears in Idylls by Theocritus, which has the earliest example of an elegy.

"Bitter constraint and sad occasion dear,
Compels me to disturb your season due;
For Lycidas is dead, dead ere his prime,
Young Lycidas, and hath not left his peer."

“In Memoriam A.H.H." by Alfred Lord Tennyson contains one of the most famous quotes about love. It is a requiem for Tennyson’s friend Arthur Henry Hallam who died suddenly in 1833 at just 22 years old.

"In Memory of W. B. Yeats" by W. H. Auden is a tribute from one great poet to another. Auden greatly admired Yeats and wrote this elegy shortly after Yeats’s death in 1939. In addition to being an elegy for Yeats, the poem is also a reflection on poetry itself.

"With the farming of a verse
Make a vineyard of the curse,
Sing of human unsuccess
In a rapture of distress;

In the deserts of the heart
Let the healing fountain start,
In the prison of his days
Teach the free man how to praise."

"The Duino Elegies" by Austrian poet Rainer Maria Rilke is a collection of ten elegies. Duino refers to Duino Castle where Rilke wrote these poems. He was invited to stay at the castle by Princess Marie von Thurn und Taxis, and Rilke dedicated the elegies to her. Rather than being about a person’s death, the Duino Elegies are about beauty and suffering. In this regard, they can be seen as a lamentation for life itself. This excerpt is from "The First Elegy."

"Who, if I cried out, would hear me among the Angelic
Orders? And even if one were to suddenly
take me to its heart, I would vanish into its
stronger existence. For beauty is nothing but
the beginning of terror, that we are still able to bear,"

The Elegy Lives On

The elegy has survived for thousands of years. The style has changed and evolved, but the form lives on in the present day.

What the Living Do by Marie Howe

"What the Living Do" by Marie Howe is a somber exploration of loss and mourning.

"I thought it again, and again later, when buying a hairbrush: This is it.
Parking. Slamming the car door shut in the cold. What you called that yearning.
What you finally gave up. We want the spring to come and the winter to pass. We want
whoever to call or not call, a letter, a kiss — we want more and more and then more of it."

You Were You Are Elegy by Mary Jo Bang

The poem "You Were You Are Elegy" by Mary Jo Bang is heartbreaking in its simplicity.

"Fragile like a child is fragile.
Destined not to be forever.
Destined to become other
To mother. Here I am
Sitting on a chair, thinking
About you. Thinking
About how it was
To talk to you."

"Apples" from the book The Broken String by Grace Schulman blends the classical and modern meanings of elegy together by using pastoral imagery to express grief.

"The air is bland here. I would forfeit mist
for hail, put on a robe of dandelions,
and run out, broken, to weep and curse — for joy."

The Power of Poetry

Poetry is an ancient art form that poets have been using to convey our deepest emotions since the beginning of the written word. Explore other powerful forms of poetry.