An epithet is a descriptive term or qualifier that identifies an attribute. From the Greek term that means “added,” it is a useful literary or rhetorical device when describing a character for the reader. While a modern use of epithets can be derogatory, classic literary epithets are an important element of literature. 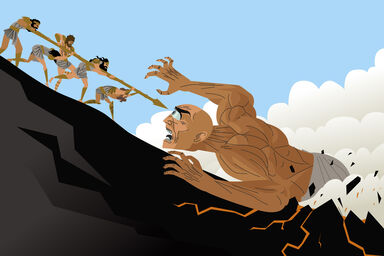 There are three types of epithets that are effective in different ways, depending on historical and literary contexts. Here are some definitions and examples.

In longer pieces, the author may repeat an epithet that describes the character over several different scenes. A more common use of a fixed epithet is known as a nickname or sobriquet.

Example: In The Odyssey, Homer refers to Odysseus many times as “son of Laertes,” Penelope as “wife of Odysseus,” Eurymachus as “son of Polybus,” and Zeus as “king of kings.”

Another type of epithet is a kenning, which is a compound or two-word metaphorical expression that replaces a noun. Kennings are primarily found in Old English and Old Norse works.

Negative or disparaging epithets take many forms, from teasing nicknames to ethnic, racial or homophobic slurs. Unlike euphemisms, these derogatory terms are meant to insult an opponent or group of people without directly stating the targeted characteristic.

Example: “Piggy” in William Golding’s Lord of the Flies is named by his bullies for his short, stocky figure.

Some epithets are such apt qualifiers that they become archetypes of their own. Regardless of their source material, these well-known descriptions can be found in many different works of literature – and even in political movements.

Romeo and Juliet were the prototypical “star-crossed lovers” from William Shakespeare’s Romeo and Juliet. But, they were far from the last. The epithet indicates a couple whose future is ill-fated or meant to fail.

Example: John Green’s The Fault in Our Stars (named after Julius Caesar, another Shakespearean tragedy) features lovers Hazel and Augustus. They are two cancer patients who must make the most of the time they have left.

Commonly used as a derogatory term for a black person who follows the authority of a white person, the epithet “Uncle Tom” originated in Uncle Tom’s Cabin by Harriet Beecher Stowe. Its use in this context predates the Civil Rights Movement of the 1960s.

Example: The character of Mammy in Margaret Mead’s Gone With the Wind is considered by many to be an “Uncle Tom” figure. She is depicted as a black character who is content to be a slave.

He Who Must Not Be Named

Sometimes an epithet can be silent. Consider the nameless gold-spinner in Rumplestiltskin or the wildly undead ghost from Beetlejuice. In both cases, the pressure to refrain from naming an antagonist causes characters to rely on some unconventional epithets.

Example: Characters in J.K. Rowling’s Harry Potter series often refer to Voldemort, the wizarding world’s dreaded villain, as “He Who Must Not Be Named.”

Epithets are present in history books and modern culture, as well.

Members of royalty often have an epithet after their name. Also known as cognomens that signify how a person is well known, these epithets represent the figure’s historical legacy.

Having an easily recognizable epithet in popular culture is often a sign of success for musicians and actors. Here are just a few of the most famous cultural epithets.

Using Literary Devices in Your Writing

Though using an epithet can help to establish a character’s traits, it’s still important to use descriptive writing in your piece. Check out some famous examples of descriptive text from literature and learn how to effectively combine literary devices for the ultimate storytelling experience.