Erosion simply means to wear away or cause to diminish. Erosion is the process that occurs when a surface or substance wears away slowly. It is often the result of corrosion, or of one substance eating into another. There are many types of erosion. Develop a deeper understanding of this scientific concept by reviewing several examples of erosion. 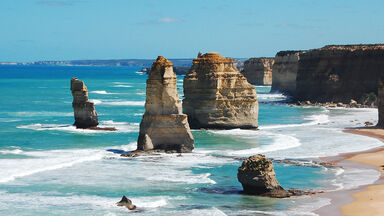 examples of erosion of rocks in Australia
Advertisement

Water erosion occurs when soil ends up being detached, removed, or washed away by water. It can be related to rainfall or running water, such as the movement of a significant quantity of melting snow. There are several examples of this type of erosion.

This type of erosion is caused by rainfall. It is the first stage in the process of water erosion. When raindrops hit the soil, they cause individual soil particles on the ground to disperse and splash back down. This makes it difficult for rain to permeate the ground, so the water builds up on the surface and leads to the formation of moving water, in the form of runoff.

Also caused by rainfall, sheet erosion is a more severe form of erosion than splash erosion. It is the sheet-like washing away of loosened particles of soil. It is caused by runoff resulting from rainfall or a large quantity of melting snow. Sheet erosion commonly, but not always, occurs on land that has a slope.

Rill erosion can be caused by rainfall or the movement of melting snow. Rather than soil washing away in sheets, rill erosion causes the water to cut through the soil, creating small channels on either side that measure no more than 3/10 of an inch in depth. These shallow flow paths through which rainwater flows are an example of rill erosion.

Rill erosion can progress into gully erosion. When the water movement is powerful enough to increase the channels to larger gully pathways greater than 3/10 of an inch, that is when gully erosion occurs. This type of water erosion can be caused by rainfall or melting snow as it moves. It occurs in areas where runoff water accumulates and flows quickly.

Tunnel erosion is the most severe form of water erosion caused by rainfall or melting snow. With this type of erosion, water drips through a hole in the surface, removing soil underneath ground level and carving out a tunnel. It may not be obvious from the surface that there is a hollow area below, at least in the early days after a tunnel forms. Once a tunnel has been in place for a while, the soil on the surface will begin to give way on its own, if it has not already collapsed due to weight being placed on it.

Unlike oceans and gulfs, rivers and streams flow between the banks rather than producing crashing waves. River and stream erosion occurs as a result of the impact of moving water on the soil on either side of a flowing body of water. As water flows, the banks of streams, rivers, creeks and other bodies of water can be worn away due to erosion.

Wind erosion is erosion caused by wind. It occurs when wind picks up soil from one area, carries it a distance and leaves it somewhere else. It can occur in locations that are windy a lot of the time, as well as places that only occasionally experience wind. The power of wind can move loose soil and also wear down surfaces due to particles carried in the wind.

Ice erosion is caused by the movement of glaciers, which are powerful ice formations. The most powerful examples of glacial erosion occurred long ago, during the Ice Age. There are still some places on earth (Greenland and Antarctica) where this phenomenon still occurs. Glaciers can cause erosion to occur as they move across land, picking up and displacing soil and anything else that they go over.

The Role of Gravity in Erosion

Now that you are familiar with some examples of different types of erosion, expand your knowledge of the natural world by studying the difference between weathering and erosion. From there, further explore these two concepts by exploring examples of physical weathering. Chances are that you’ll start to notice examples of erosion and weathering as you go about your everyday activities.