What is a euphemism? A euphemism is a polite expression used in place of words or phrases that might otherwise be considered harsh or unpleasant. These phrases are used regularly, and there are many common examples of euphemisms in everyday language. Which of the following euphemism examples have you used or heard? 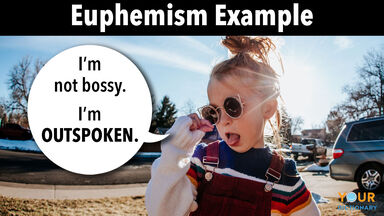 Euphemisms have many different uses. They can help you avoid being overly blunt and remain in a tone of politeness. People will generally understand the meaning of a euphemism, even though you're not "coming right out with it." With that in mind, let's take a look at a few different categories of euphemisms.

Does anyone really deal with death well? It's such a delicate — and final — state that many of us like to dance around the truth. Here are some delicate ways to discuss death and dying.

Although it's far less delicate than death, being unemployed is also difficult to discuss. It's a direct blow to the ego, so many people like to approach this subject with a gentle touch, too.

Talking about money and financial circumstances is sometimes considered inappropriate. As a result, quite a few financial euphemisms exist in everyday conversation. They're often used in conjunction with money slang words.

To some people, bodily functions and age are topics to be glossed over rather than to be addressed directly. Will any of the following skirts around the truth soften the proverbial "blow?"

When you were raised, you may have been told to avoid saying anything if you can't find anything nice to say. With that in mind, it's common for people to use euphemisms when describing less-than-flattering characteristics or attributes about a person or to describe behaviors that are less than desirable.

There are many circumstances of life, some of which are often described using euphemisms than being referred to in a direct manner. Explore a selection of euphemisms that describe a variety of situations.

It's hard to say if people really avoid "sex talk" these days. All you have to do is settle down for an epic TV marathon and you'll be met with countless scenes pertaining to sex. However, some folks prefer to approach the subject with euphemistic bliss rather than direct discussion.

Don't Be So Literal

These are just some of the many euphemisms that you may encounter. Now that you're familiar with the euphemism definition, you'll probably notice them a lot in everyday conversation and in literature. The next time you or someone you're speaking with says something that has a different meaning than the literal words, consider whether the statement is a euphemism for some other less polite, less pleasing word or phrase. If the substitute statement has a negative connotation rather than a polite, positive one, what you're seeing is probably a dysphemism instead of a euphemism.

Do these examples remind you of anything? Perhaps you're thinking about idioms. Idioms are words or phrases that aren't meant to be taken literally, like having "cold feet" instead of being nervous about something. Take a look at these idiom examples to see if you can spot the difference between euphemisms and idioms.