Examples of Evolution in Biology and Beyond

Evolution is the biological change of a species over a span of time. The process of evolution keeps a species alive and thriving, and allows organisms to successfully pass down their genes. Keep reading for examples of how different species evolve to best survive their surroundings. 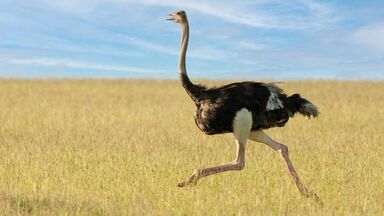 Evolution is the interaction between genetic changes and natural selection, also known as "survival of the fittest." Charles Darwin famously studied various species to determine how environmental adaptations allowed them to survive. Natural selection reflects a species' decision to pass down favorable genes and how well a species can use its traits to survive its environment. Here are some evolution examples of species and their changes over many generations.

This light-colored moth became darker after the Industrial Revolution due to the pollution of the time. This mutation allowed dark peppered moths to blend into their sooty surroundings and avoid being eaten by predators. Soon most peppered moths were black instead of light — but notably, the lighter color returned to the population when pollution declined.

Females always choose the male peacock with the brightest colored feathers. The genes for bright features are passed down to male offspring, who also have a better chance of finding a mate and passing down their genes.

The finches on the Galapagos Islands have all developed different beaks. Originally, the finches had large beaks for cracking large nuts. A group of finches came from another island who were larger and drove those away and ate their nuts. Over time, the finches developed beaks to eat smaller nuts that the other finches did not eat.

Birds such as ostriches, emus and penguins are unable to fly. However, this hasn't always been the case — each of these flightless birds has ancestors who easily flew. Over many generations, ostriches and emus evolved to have larger bodies and feet made for running on land, which left them without the ability (or need) to fly. The same goes for penguins, who traded typical wings for swim-friendly flippers over many thousands of generations.

Whenever you use a pesticide, it kills the majority of an insect population. However, certain insects will experience a gene mutation to develop immunity to it and those insects will reproduce. This happens very quickly, within a few generations, since the generation length for insects is short.

The Blue Moon Butterfly on the Samoan islands was attacked by a parasite, which destroyed male embryos. This changed the balance of male and female but that was remedied within 10 generations. This is because the few male moths that were immune lived to breed.

Deer mice used to be dark-colored when they primarily lived in the woods. However, a portion of the population split away several thousand years ago and found a new habitat in the sandhills. These deer mice are lighter, having evolved over thousands of years to match their surroundings. Meanwhile, the dark deer mice have been deprived of these light genes and continue to have dark-colored offspring.

Mexican cavefish once had eyes, but in the caves, eyes were no longer necessary. They have also lost their pigmentation because they no longer need camouflage from predators. This is an example of regressive evolution, the belief that "if you don't use it, you lose it" when it comes to traits.

These ants have a chemical signal that identifies their colony. Some ants learned to imitate this signal from another colony, so they can attack a colony and take over. The worker ants will not even realize there has been an invasion and continue to work.

Archaeologists rely on fossil records to note the steps of human evolution. While there are some gaps in our knowledge and the timeline of how the modern human (homo sapiens) came to be, we do know that humans evolved from dryopithecus, the ancient ancestor of both humans and apes. Human evolution is marked by man's ability to walk upright, use tools and form a society.

Natural selection is one of the four mechanisms of evolution. It follows many generations of genetic changes that make it more difficult for predators to eat organisms and more desirable for mates to parent offspring for them.

The four mechanisms of evolution are:

All of these factors come into play in any example of evolution. Every living organism's genetic structure is affected by these mechanisms of evolution to some degree.

The term "evolution" typically refers to biological changes over time. But the term is also used when referring to changes in society, politics and technology. Like biological evolution, these changes take place over a long period of time and across many generations. Examples of other types of evolution include:

It's important to recognize that all organisms, including every aspect of human thought and society, are in the middle of an evolutionary process. Thanks to Darwin's studies, we can apply the theories of evolution to explain our everyday lives.

The conditions of our planet have both affected and been sustained by the ongoing evolution of living organisms. Without evolution, many species would have died out long ago — possibly preventing life on Earth to exist in the present moment. Check out 15 additional examples of animal adaptations on our planet. Or, take a look at how plants have adapted to different global environments.