A fable is a short story that teaches a lesson or conveys a moral. You'll find a lot of personified animals in fables, like talking turtles and wise spiders. Children tend to find this appealing, making the moral of the story more relevant. Fables are closely associated with fairy tales. While fairy tales can also feature talking animals, they don't have to feature a solid moral or lesson as fables do. Fairy tales are more focused on entertainment, often with fanciful pops of magic and color. 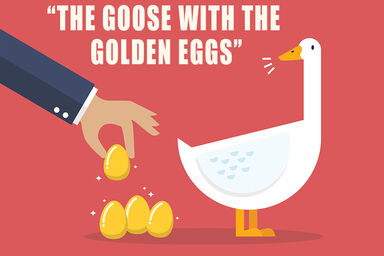 Goose with golden eggs as examples of fables

For a better sense of what they are and how they are written, review these examples of fables from over the ages.

Animal Farm by George Orwell can be classified as a fable. It features an array of animals who symbolize various classes of citizens and characters during the Russian Revolution. We learn that greed can blunder a revolution and undermine the people's determination to overthrow a corrupt regime. The animals are very literal depictions of real people. For example, Napoleon the pig is representative of Joseph Stalin.

For more on the extensive use of symbolism and allegories in this great tale, check out Examples of Allegory Books.

Aesop is quite possibly the most famous fable writer of all time. We don't know everything about him, but people believe he was a slave in Greece and wrote much of his work around 550 B.C. Many of the morals in his fables revolve around equality, justice, and virtuous behavior. Without question, Aesop created a treasure trove of fables for children to read and draw lessons from.

The Ant and the Grasshopper

In this fable, sometimes titled The Grasshopper and the Ant(s), the ant saves food for the winter and the grasshopper does not. When winter comes, the hungry grasshopper begs for food, but the ant refuses to share. The moral is, "Prepare for the days of necessity."

The Beekeeper and the Bees

While a beekeeper is away, a thief enters his apiary and steals all the honey. When the bees return, they assume the beekeeper took all their honey and start to sting him. He calls them ungrateful because they let someone steal the honey and then attack the person who looks after them. The moral is, "Make sure you're seeking revenge on the right person."

The Country Mouse and the City Mouse

In this fable, the city mouse takes the country mouse to the city to sample the fine food there. During the meal, two dogs scare the mice and the country mouse returns home, where he is safe. The moral is, "Better beans and bacon in peace than cakes and ale in fear."

King Midas loves gold so much, he asks a fairy to grant his wish that everything he touches turns to gold. He's very happy until he touches his daughter and she turns to gold. The moral is, "Be careful what you wish for."

The Goose With the Golden Eggs

The Man and the Wood

A man takes an axe head into the woods and asks the trees to give him one branch. When they do, he proceeds to fit his axe head onto the branch he was given. With his fully-formed axe, the man chops down all the trees. The moral is, "Do not give your enemy the means of destroying you."

The Old Lion and the Fox

An old lion pretends to be sick only to capture animals that show him sympathy. He puts them in his sack to eat later. A fox notices that the tracks lead into his den and not away, so he tricks the lion into closing his eyes and rescues the animals. The moral is, "Using your head keeps you from making foolish or disastrous mistakes."

The Sun and the Wind

Two goats cross a bridge from opposite ends. They meet in the middle and neither is willing to budge. So, they fall into the river and die. The moral is, "Being unwilling to compromise can lead to a dead end."

Gulliver's Travels is another modern-day fable that focuses on corrupt politicians. In it, Gulliver travels to four different destinations. First, he goes to Lilliput where he's large and everyone else is small. Then, he travels to Brobdingnah, where he is small and the locals are large.

Next, he moves on to Glubdugdribb where he's able to commune with the dead and understand all the deceptions that exist in history and modern day society. Finally, he travels to Houyhnhnms, where the horses are gifted with reason and the more primitive creatures look like humans.

Gulliver loves Houyhnhnms so much that he never wants to leave. It's a utopian society where wisdom abounds. By the time he makes it back to his home country - England - he's appalled by his everyday men. The theme here is that the world needs to be more moral and virtuous.

In this fable, we meet Jonathan Livingston Seagull, a gull who's bored with a life that revolves around daily quarrels over food. So, he decides to learn how to fly and is outcast by his community. In his new life, he meets a gull that teaches him how to be tenacious and brave.

His new friend tells him to "begin by knowing that you have already arrived." Armed with new information on how to live a freer life, Jonathan returns to his community and opens the minds of the members of his former community. The moral of the story relates to the value of love and acceptance. We can all learn something from those around us, if we remain nonjudgmental.

The Salmon Who Dared to Leap Higher by Ahn Do-hyun

Salmon live a pretty basic life. Once they're born, they spend the rest of their lives swimming upstream to return to their place of birth, procreate, and die. Here, we meet a salmon with beautiful silver scales who dares to be different. In doing so, he learns about love and perhaps the most valuable lesson of all: it's okay to dream big.

Have you ever considered writing your own fable? You can incorporate all kinds of fantasy into your tale. Let a tortoise talk to a hare. Let animals live on a farm as they express political views. You can even consider writing a short story with a powerful moral or theme.

That teaching can be anything from "be kind to people" to "lying will get you nowhere." When you're ready to present a compelling moral in a fanciful tale, be sure to read Get Creative: How to Write a Short Story. It'll be your blueprint to success.