Examples of Fallacies in Everyday Life

Fallacies are mistaken beliefs based on unsound arguments. They derive from reasoning that is logically incorrect, thus undermining an argument's validity. Explore the different types of fallacies you can find through examples. 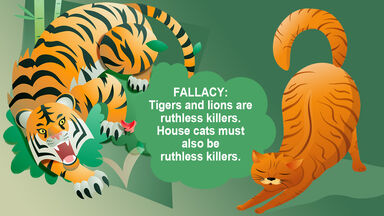 There are many different types of fallacies, and their variations are almost endless. Given their extensive nature, we've curated a list of common fallacies so you'll be able to develop sound conclusions yourself, and quickly identify fallacies in others' writings and speeches. Explore several common fallacies and examples.

Ad Hominem, also known as attacking the person, fallacies occur when acceptance or rejection of a concept is rejected based on its source, not its merit.

When you commit an appeal to authority fallacy, you accept a truth on blind faith just because someone you admire said it.

Appeal to ignorance fallacies occur when someone asserts a claim that must be accepted because no one else can prove otherwise.

These fallacies occur when someone seeks to gain acceptance by pointing out an unfortunate consequence that befalls them.

You might have jumped on the bandwagon before. Well, bandwagon fallacies occur when a proposition is claimed to be true or good solely because many people believe it to be so.

Begging the question, also called circular reasoning, is a type of fallacy that occurs when the conclusion of an argument is assumed in the phrasing of the question itself.

You’ll see these fallacies happen when it is assumed that, because two things occur together, they must be related.

False dilemma fallacies occur when someone is only given two choices for possible alternatives when more than two exist.

If you’ve ever been accused of jumping to conclusions, then you’ve committed a hasty generalization. This type of informal generalization makes an assumption based on a small sample and can lead to stereotypes.

These fallacies occur when it is assumed that, because one thing happened after another, it must have occurred as a result of it.

A red herring fallacy occurs when someone uses irrelevant information to distract from the argument.

You might see a slippery slope fallacy when someone assumes a very small action will lead to extreme outcomes.

A straw man fallacy happens when someone appears to be refuting the original point made but is actually arguing a point that wasn't initially made.

A sweeping generalization happens when a very broad application is applied to a single premise.

Now that you’ve examined some common errors in reasoning, you'll be better equipped to recognize them when they come your way. In your future writings or debates, this will serve as a guidepost to make sure you don't fall into similar trappings. Since you’ve discovered all there is to fallacy, it’s time to learn to write an argumentative essay!