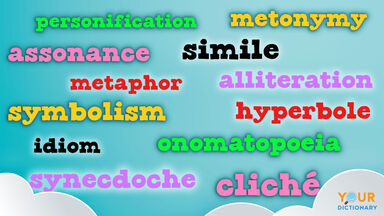 Understanding the Concept of Figurative Language

Any time your writing goes beyond the actual meanings of your words, you're using figurative language. This allows the reader to gain new insights into your work. While there are 12 common types, the five main branches of the figurative tree include metaphors, similes, personification, hyperbole, and symbolism.

One of the best ways to understand the concept of figurative language is to see it in action. Explore a few examples of the five main branches.

Since those examples are just scratching the surface, learn about the 12 common types of figurative language and how they are used through examples.

A hyperbole is an outrageous exaggeration that emphasizes a point. It tends toward the ridiculous or the funny. Hyperbole adds color and depth to a character.

When you use a metaphor, you make a statement that doesn't literally make sense. For example, "Time is a thief." Time is not actually stealing from you, but this conveys the idea that hours or days sometimes seem to slip by without you noticing. Metaphors only make sense when the similarities between the two things being compared are apparent or readers understand the connection between the two words.

When you look at personification, it gives human characteristics to inanimate objects, animals or ideas. This can really affect the way the reader imagines things. Personification is often used in poetry, fiction and children's rhymes.

A simile also compares two things. However, similes use the words "like" or "as."

In writing, symbolism occurs when a word has its own meaning but represents something entirely different. Explore a few everyday and literary examples of symbolism.

Symbolism is often found in literary works. Dive into a few different examples.

The "stage" in the play symbolizes the world, and the "players" represent human beings.

"All the world's a stage, and all the men and women merely players. They have their exits and their entrances, and one man in his time plays many parts."

Bronte uses the imagery of the natural world to symbolize the wild nature and deep feelings of her characters.

"My love for Linton is like the foliage in the woods. Time will change it; I'm well aware, as winter changes the trees. My love for Heathcliff resembles the eternal rocks beneath a source of little visible delight, but necessary."

You see assonance used a lot in poetry. It's where vowel sounds are repeated.

Something becomes a cliché in writing when it's overused. When it was first introduced, it might have been a marvel idea, but after time, it becomes cliche. Cliches are found through movies and pop culture. Check out a few popular cliché sayings.

You can find idioms in all languages. These old sayings have woven their way into the fabric of the language and have a different meaning beyond their literal meaning.

Have you ever used the word pen to mean writing? This is an example of a metonymy. It's when a word becomes linked with another to the point where it can stand for that word.

And then, there is synecdoche. While this might sound like a weird word, the concept is pretty simple. A synecdoche is when part of something is used to mean the whole thing. Brands often become a synecdoche.

Alliteration is a fun sound device. It is the repetition of the first consonant sounds in several words.

Onomatopoeia is also a sound device where the words sound like their meaning or mimic sounds. They add a level of fun and reality to writing.

Now that you have a bit of an understanding of the different types of figurative language, you can use this printable to keep them handy when writing.

Regardless of the type of word you use, figurative language can make you look at the world differently; it can heighten your senses, add expression and emphasis, and help you feel like you have the same experience as the author. With each brushstroke across the canvas, a painter adds depth to their masterpiece. Figurative language adds the same kind of depth to our writing.

So, instead of hearing the wind blow against your window tonight, perhaps you'll hear the whisper of the wind as it calls out for you like a lover in the night (personification and simile, respectively). That blank page you're looking at is actually a blank canvas. It's up to you to add texture and depth. Have fun layering your literary devices, but remember not to go overboard with them! When you're done, explore the difference between literally and figuratively to ensure you've used figurative language correctly.