Robert Frost once commented that writing free verse was like "playing tennis without a net." Free verse poems do not follow the rules and have no rhyme or rhythm, but they are still an artistic expression. They are sometimes thought to be a modern form of poetry, but the free verse type of poetry has been around for hundreds of years. 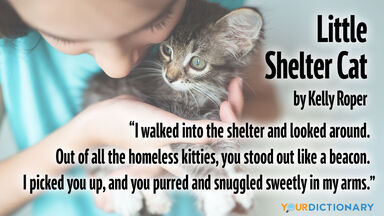 After the Sea-Ship by Walt Whitman

Known as the father of free verse, poet Walt Whitman created several free verse poems, including "After the Sea-Ship."

"AFTER the Sea-Ship--after the whistling winds;
After the white-gray sails, taut to their spars and ropes,
Below, a myriad, myriad waves, hastening, lifting up their necks,
Tending in ceaseless flow toward the track of the ship:
Waves of the ocean, bubbling and gurgling, blithely prying,
Waves, undulating waves--liquid, uneven, emulous waves,
Toward that whirling current, laughing and buoyant, with curves,
Where the great Vessel, sailing and tacking, displaced the surface ..."

Explore Carl Sandburg's astute observation of a cat in fog through the poetic form in his free verse poem "Fog."

It sits looking
over harbor and city
on silent haunches
and then moves on."

Famous free verse wordsmith Robert Graves uses sporadic rhyme within this work; however, there is no specific rhyme scheme.

"I now delight
In spite
Of the might
And the right
Of classic tradition,
In writing
And reciting
Straight ahead,
Without let or omission,

In any little time
That runs in my head;
Because, I’ve said,
My rhymes no longer shall stand arrayed
Like Prussian soldiers on parade
That march,
Stiff as starch,
Foot to foot,
Boot to boot,
Blade to blade"

Modern poet Linda J. Wolff describes her experience with death in her poem, "Free Verse Ode to Birth or Rosebuds."

I would want to establish strength; root-like,
anchored in the hopes of solidity.

Forsake the contamination of instability.
Prove I’m the poet of each line of prose.

Who needs the weakness of low self-esteem
when your fingers can grip the heart ..."

You may notice that Langston Hughes' poem "Harlem" does include some rhyming lines. However, there is no set rhyme scheme, bringing power to the few lines that do connect in rhyme.

What happens to a dream deferred?

Or does it explode?

Allen Ginsberg elevated the art of free verse with "Howl," which made him the artistic voice of his generation.

"I saw the best minds of my generation destroyed by madness, starving hysterical naked,
dragging themselves through the negro streets at dawn looking for an angry fix,
angelheaded hipsters burning for the ancient heavenly connection to the starry dynamo in the machinery of night,
who poverty and tatters and hollow-eyed and high sat up smoking in the supernatural darkness of cold-water flats floating across the tops of cities contemplating jazz,
who bared their brains to Heaven under the El and saw Mohammedan angels staggering on tenement roofs illuminated ..."

The Return by Ezra Pound

Poet Ezra Pound not only uses free verse in his poem "The Return," but he also uses words such as "uncertain wavering" to create an off-balance effect for his reader.

"See, they return; ah, see the tentative
Movements, and the slow feet,
The trouble in the pace and the uncertain
Wavering!

See, they return, one, and by one,
With fear, as half-awakened;
As if the snow should hesitate
And murmur in the wind,
and half turn back;
These were the "Wing'd-with-Awe,"
inviolable."

i carry your heart with me by e.e. cummings

Free verse poetry came naturally to e.e. cummings, who enjoyed breaking both poetic and writing conventions in all-lowercased poems such as "i carry your heart with me."

"i carry your heart with me (i carry it in
my heart) i am never without it (anywhere
i go you go, my dear; and whatever is done
by only me is your doing, my darling)
i fear

no fate (for you are my fate, my sweet) i want
no world (for beautiful you are my world, my true)
and it's you are whatever a moon has always meant
and whatever a sun will always sing is you ..."

Writing in free verse allowed Sylvia Plath to express unbridled and unstructured emotions, as seen in her poem "Mirror."

"I am silver and exact. I have no preconceptions.
Whatever I see I swallow immediately
Just as it is, unmisted by love or dislike.
I am not cruel, only truthful‚
The eye of a little god, four-cornered.
Most of the time I meditate on the opposite wall.
It is pink, with speckles. I have looked at it so long
I think it is part of my heart. But it flickers.
Faces and darkness separate us over and over."

The Waste Land by T.S. Eliot

The wild, unyielding imagery of T.S. Eliot's "The Wasteland" would feel too constrained within a set rhyme scheme and verse.

"April is the cruellest month, breeding
Lilacs out of the dead land, mixing
Memory and desire, stirring
Dull roots with spring rain.
Winter kept us warm, covering
Earth in forgetful snow, feeding
A little life with dried tubers.
Summer surprised us, coming over the Starnbergersee
With a shower of rain; we stopped in the colonnade,
And went on in sunlight, into the Hofgarten,
And drank coffee, and talked for an hour.
Bin gar keine Russin, stamm’ aus Litauen, echt deutsch.
And when we were children, staying at the arch-duke’s,
My cousin’s, he took me out on a sled,
And I was frightened. He said, Marie,
Marie, hold on tight. And down we went.
In the mountains, there you feel free.
I read, much of the night, and go south in the winter."

While these famous poets are well-known for breaking poetic conventions, they're not the only ones who can write poetry this way. Use these original free verse poems by poet Kelly Roper to inspire your next work.

Finding the perfect feline friend can be hard. However, sometimes, you just connect with the perfect animal. See how Roper weaves a tale in this narrative, free verse poem.

"I walked into the shelter and looked around.
Out of all the homeless kitties, you stood out like a beacon.
I picked you up, and you purred and snuggled sweetly in my arms.
It was like we had always known each other, always been together.
I filled out the form, made the donation, and took you home.
You're a little shelter cat no more. You're mine."

City of Potholes by Kelly Roper

Roper's language and line length in this poem mirror the random and jarring nature of city potholes.

"Zig-zagging down the road
Trying not to stray over the center line
Or hit a curb
Or break an axle
Or flatten a tire
Or wind up in the next surprise sinkhole.
Driving in Toledo is not a sport
For the timid or the sane or the under-insured."

An Ode to Coffee by Kelly Roper

For most, mornings are a stumble to the coffee maker. Roper expertly crafts the feeling of that first morning cup.

"Beautiful brown liquid steaming in my cup,
Becoming a muddy river as I stir in the cream.
The aroma that gives me courage,
The flavor that tastes like hope for a better day,
And the energy that renews my will to live.
Tomorrow morning we'll do it all again my friend."

Be Free With Your Writing

Poets like to create free verse poems because they aren't constrained to a rhyme scheme, rhythm or meter. Discover your ideal poetry form.