On a good day, if you have the right friends and coworkers, you can expect to hear or read some great examples of funny puns. Whether intentional or accidental, a pun is the use of a word or words that either have multiple meanings or sound like other words, the result of which is humorous. There are several different ways to make a pun. 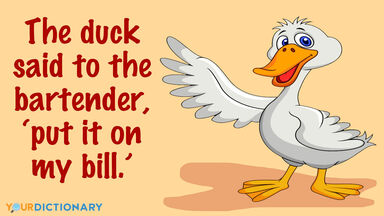 Playing With Sound and Spelling

There aren't really any stand-alone, one-word puns as they all need some kind of context to create the wordplay. However, in many cases, the pun is formed within the context by one simple word that sounds like a different word or has another meaning. These are called homophonic or homographic puns.

Homophonic puns are created by substituting one word for a similar-sounding word.

Compound puns are made by using a string of two or more words that sound similar to a string of different words.

Puns involving animals are everywhere, and they run the gamut of pun types. Here is just a small sample of the many, many funny animal puns already in existence.

There is always room for a good food pun. They’re likely to get a little cheesy! But you’ll definitely enjoy them.

When it comes to your birthday, you might not want to hear all the punny jokes. But it is a perfect time to crack a smile.

If you aren’t laughing yet, then it’s about to get hot in here. Because there are a latte punny coffee jokes!

Medicine is not a joking matter. It could even lead to a cardiac arrest. Enjoy a few other medical puns that you might find humerus.

Music can be a bit punny too! But it’s definitely an orchestrated effort.

Whether your pun-ch line is one clever word or the entire sentence, the result is always meant to be humorous - leading to funny puns (and punny funs). You may not get a belly laugh for your efforts, but a good pun can go a long way to ease a tense or dull moment. Have even more fun with puns by laughing at these puns for kids.