You probably know that gas is one of the three states of matter. But unlike solids and liquids, the other two states of matter, gases have no defined volume outside the container they're in. Many elements exist as gases at standard temperature and pressure, while other elements and compounds can become gases under certain circumstances. Take a look at several examples of gas in different contexts, organized by types of gases. 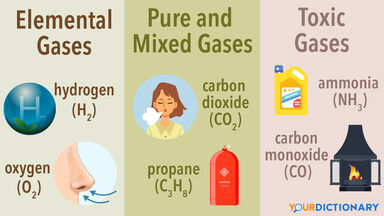 Examples of elemental gases include:

The monogamic noble gases are helium, neon, argon, krypton, radon and xenon. When paired with the other gases on the list, these gases are known as the elemental gases.

Pure gases can take several forms. They might be made up of individual atoms, such as neon, or they can be made up of atomic gases or noble gases. Mixed gases, on the other hand, consist of more than one kind of pure gas. In the Earth's atmosphere, for example, there is a wide mix of different gases including oxygen and other atoms that are released.

Some examples of pure gases and mixed gases include:

Check out a list of gases considered to be toxic:

Breathing in a toxic gas for just a short time can result in long-term damage, so seek help as soon as possible if you've been exposed to a toxic gas. If you're not sure about the toxicity of a particular gas, it's advisable to consult poison control or your local medical professional.

The Stages of Matter Really Matter

Every day, we encounter gases, not just in a science lab, but in the air that we breathe and the world that we live in. It's important to know which of these gases are elemental, pure or mixed, or toxic so you can best protect yourself. For more information on the different stages of matter, explore examples of physical properties of matter. You can also learn how gas becomes solid (and how other stages of matter change phases).