Examples of Gene Flow in Plants and Animals

Gene flow is the exchange of genes between two separate populations. This is most often accomplished when animals or spores from plants migrate to a new area. Any time a gene is introduced into a population where that gene once did not exist, gene flow has occurred. Discover some gene flow examples in both the plant and animal kingdoms. 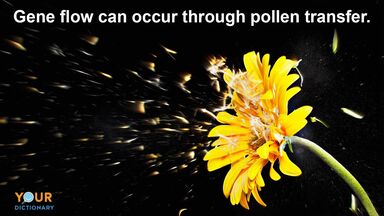 Examples of Gene Flow for Plants

Gene flow can occur among plants in a wide variety of ways.

There are many gene flow examples in the animal kingdom.

Gene flow, which can also be described as migration, is a common occurrence with both plants and animals. It occurs when alleles or genes are successfully transferred from one population to another population. It can occur naturally or intentionally. Gene flow can take place in several ways.

Gene flow can shape and change ecosystems and species, which makes it very important to understand both for those who are interested in nature and for those who are interested in science. If you find this topic to be interesting, expand your knowledge of how genetics works by reviewing some examples of genotype and phenotype. From there, you may want to move on to explore some examples of homozygous genes.