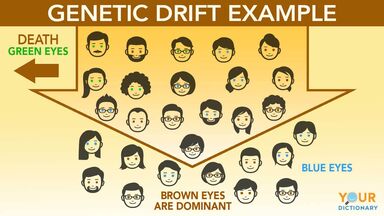 What Is a Genetic Drift Example?

In evolution, genetic drift refers to the change in the frequency of an allele in a population over time. It's a random shift in the occurrence of this specific gene variation that isn’t caused by environmental factors. In simple terms, this allele randomly starts to become more or less common in a population. For example:

Of the two pink monkeys in the world — one male, one female — the male monkey mates with a white female monkey. Since white is the dominant allele, four of their five offspring are white. Slowly, through genetic drift, the instances of pink monkeys will be eliminated.

Green eyes are a recessive gene. The last green-eyed person in a small town dies, leaving only brown-eyed and blue-eyed people. With the green eye gene gone, people only have brown or blue eyes in the town, with brown being more dominant.

A wildflower population consisting of blue, purple, and pink flowers is subjected to a mudslide that kills most of the blue ones. As time progresses, blue flowers eventually die out, leaving only purple and pink wildflowers.

A dog with one ear smaller than the other mates with a dog with normal-sized ears. All of the pups are born with odd ears by chance.

With these examples, you now have a better idea of what genetic drift is, how it works in the real world and what type of impact genetic drift can have on a species or on a population. Understand more about evolutionary theories by looking at natural selection examples.