Genetic engineering is the process by which an organism's genetic material is altered or selected so that the organism will have specific characteristics. Explore different genetic engineering examples in humans, animals, food, and medicine. 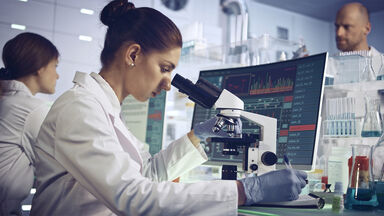 What Is Genetic Engineering?

Rapeseed is a flowering plant used to make certain types of vegetable oil. Genetic engineering has allowed these plants to be resistant to certain types of pesticides so that when the fields are treated to remove pests, the plants will remain unscathed.

Poplar trees developed by scientists at the University of Washington can absorb polluted water through their roots and clean it before the water is released back into the air. The plants were many times more efficient at cleaning certain pollutants than regular poplars.

Genetic modification is often used to make healthier foods, such as golden rice, which contains beta-carotene — the very same vitamin that makes carrots orange. The result is that people without access to many vitamins will get a healthy dose of vitamin A when the rice is consumed.

Demand for wood can be met by trees that grow faster than average. Genetic engineering has produced trees that can ward off biological attacks, grow more quickly and strongly, and create better wood than trees that are not genetically modified.

When tomatoes are genetically engineered, they can be made bigger and more robust. These are engineered to produce tomatoes that can remain fresh for longer, be shipped farther from where they are grown, and be harvested at the same time rather than harvesting only parts of a field at each harvest.

Instead of spraying insecticide on plants, why not genetically engineer crops that kill pests on their own? Corn was developed through genetic engineering to produce a poison that kills insects. While this corn may also harm beneficial insects such as butterflies, supporters say that the pros outweigh the cons.

Onions and crying seem to go hand-in-hand, but not anymore. In 2008, a New Zealand scientist engineered an onion without the enzyme that tears you up called a sunion. These sweeter onions won't make you cry.

One of the most controversial uses of genetic engineering has been cloning, or producing a genetically identical copy of an organism. While the ethics of cloning are hotly debated, the first-ever sheep (named Dolly) was cloned in 1996 by scientists. In 2020, scientists cloned the endangered black-footed ferret.

It sounds strange, but in 2007, scientists in South Korea altered the DNA of a kitty so that its fur would glow in the dark. They then cloned other cats from it, making the world's first glowing cats.

Methane is produced by cow flatulence, and the chemical is a huge contributor to global warming. Cows that fart less than average have been produced to fight the deleterious effects that cow flatulence can have on the environment.

Genetic modification has helped create pigs that can better digest phosphorous, decreasing the pig's phosphorous output. The result is that manure, which is often made from pig waste, is less destructive to the environment due to its lower phosphorous content.

Salmon do not produce growth hormones year-round, so scientists have looked toward genetic engineering and found a solution. A modification that allows salmon to grow twice as fast as those that are not engineered was the answer.

Bananas were developed through a genetic modification that offers a vaccine against diseases such as cholera and hepatitis. Just like with a needle vaccine, people who eat them develop disease-combating antibodies that make them immune to a disease.

Amid the COVID-19 pandemic, the COVID-19 vaccine used genetic engineering to achieve immunity. The Pfizer and Moderna vaccines use mRNA genetic sequencing to help a person's body recognize the COVID virus.

While not currently available, scientists are working with germline editing for reproduction. This could work to ensure children aren't born with specific defects and undesirable traits.

Rather than injecting animals with venom and extracting the antibodies, scientists are using genetically modified DNA to replicate venoms by creating synthetic DNA. This DNA that replicates the venom works to produce the immunogens in the body for the toxins.

Heparin is a medication to help with blood clotting disorders that is derived from animals. However, scientists are working to create a genetically modified version of heparin that doesn't require animal sources.

As some of these examples show, genetic engineering can be a controversial science, but it may also serve many useful purposes. Keep your love of science going through types of variables in science experiments.