For example, two mice that look virtually identical could have different genotypes. But if they have visibly different traits - say, one has white fur and the other has black fur - then they have different phenotypes. 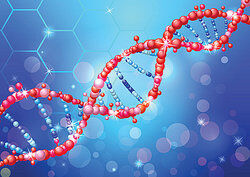 How does genotype affect phenotype? Simple. Genotype is the collection of genes responsible for the various genetic traits of a given organism. Genotype refers specifically to the genes, not the traits; that is, the raw information in an organism’s DNA.

Genotype is determined by the makeup of alleles, pairs of genes responsible for particular traits. An allele can be made up of two dominant genes, a dominant and a recessive gene, or two recessive genes. The combination of the two, and which one is dominant, determines what trait the allele will express.

Genotype simply means what alleles are carried in a particular organism’s DNA. It can’t be determined by simple observation; it requires biological testing. Genotype is inherited from an organism’s parents and expresses all of the genetic information about it.

It’s hard to provide concrete examples of genotype. The term just means “the genes a particular organism has.” Any example of a genotype would just be a chart of a particular living thing’s chromosomes, or DNA molecules responsible for various genetic traits. However, having certain genes does have observable results.

Or suppose you have brown eyes. The visible eye color is your phenotype, but it tells us nothing about your genotype. Multiple different genes affect eye color in humans, and any of them could manifest dominant or recessive traits in your phenotype - that is, the unique shade of brown in your eyes.

Phenotype is what you see - the visible or observable expression of the results of genes, combined with the environmental influence on an organism's appearance or behavior. Everything from the shape of a bird’s wing to the song of a humpback whale can be considered part of the phenotype: observable aspects of that animal that are determined, at least in part, by its genes.

Phenotype means “concrete results of an organism’s genotype.” Phenotype, therefore, is observable by nature. Every trait determined by a gene, even partially, is part of its phenotype. Just a few of the countless examples of the phenotypes of living things follow.

A World of Genes

Genes are the basic structure of life. The foundation of biology is genetics, and at the simplest level, genetics is a matter of genotype - the genes you have - and phenotype - the traits those genes give you. Between the two, genotype and phenotype define a large part of what an organism is.

For more on genetic science, check out our article on incomplete dominance. If you’re in the mood for some chemistry after all that biology, visit our pages on heterogeneous mixtures.