A genre is a category of art, music, or literature. The following are some popular examples of genres, along with some related sub-genres. Not only will you find literary genres, but some of the most popular music genres as well. 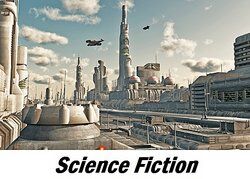 A fictitious city in science fiction as examples of genre
Advertisement

Action and adventure are sometimes considered two distinct genres, however, the two go hand-in-hand: they involve exciting sequences and obstacles that must be overcome before reaching a goal. There are many different categories of action-adventure stories.

The military genre usually involves stories of battle and espionage from the war front. Examples of this genre include titles like:

This genre, in the James Bond vein, recounts the pulse-pounding expeditions of spies in various agencies throughout the world. Examples include:

This genre covers the Wild West, typically including gun duels, train robberies, heists, and showdowns, known collectively as Westerns. A few fun examples you might know include:

Comedies are humorous stories intended to make the reader or viewer laugh. Whether it’s a literary genre or found in the most popular music genre, comedy is just funny.

Although these stories are intended to be funny, they also touch darker areas of storytelling, such as death and fear. Black comedy makes it way into books, movies and songs in these examples.

A parody intends to mimic another genre to humorous effect. Parodies can be intended to mock and criticize as well as to pay homage like:

Romantic comedies, or rom-coms, mix love stories together with comedic events. Examples are a plenty for this sub-genre.

This type of comedy features physical humor such as pratfalls, silly and exaggerated body language, and unlikely scenarios.

Stories about magic spells, mythical creatures, and fabled kingdoms are known as fantasies. This genre sometimes includes witchcraft and wizardry, dragons and unicorns, and an emphasis on legend. Check out a few fantasy sub-genres and examples.

This type of fantasy story demonstrates a general truth or a parable. Examples include:

These are often age-old stories that include magic and folklore in addition to traditional fantasy characters like elves and goblins. Fairy tales are a popular movie genre but can be found in music and literature as well.

While legends may include bits of historical fact, they are usually made to seem larger than life, as in the Legend of King Arthur.

A fantasy story that may include elements of scientific fact is known as science-fantasy. You might seem scientific fantasy examples like:

Horror stories are intended, as the name suggests, to horrify and scare an audience. The genre of horror has been shocking audiences for many centuries and includes many sub-genres.

These are stories where the dead return to life and haunt the living, such as Dickens' A Christmas Carol. Sometimes the ghosts are trying to teach the living a lesson. Other examples include:

Monster stories use creatures that frighten or threaten human beings as the antagonists. Check out examples like:

Popular in cinema, slasher stories tell of deranged killers who are out to punish regular people. Slasher music, literary, and movie genre examples might include:

These stories paint a future where humankind is up against a threat like zombies or vampires and must survive against the odds.

Mystery always leaves you guessing. Not only are you guessing who did it, but what will happen next. Explore several different subgenres of mystery along with music, movie, and literary examples of each.

You’ve entered the world of whodunit. This thriller sub-genre uses ace detectives and medical specialist to find out the who, what, and why like:

This genre leaves you on the edge of your seat waiting for that next moment of action. Here you’ll find examples like:

When you are ready for a good cry or just want to curl up to smile at a good romance, then it is time to look for drama. You might find a heartwarming family story or a spicy romance set 100 years ago.

Love lost, love at first sight, and even forbidden love will be found here. Find a few titles that you might enjoy.

Is your jam more history? You’ll find all different types of historical pieces in the genre. Explore from live to life through these titles:

Endless tears for days. Tragedies can be epic or everyday, but they always hit you right in the heart strings. Dive into these tragedy examples.

Any story that uses scientific concepts to explain the world or the universe is known as science fiction, sci-fi, or syfy. This genre is very similar in construction to fantasy, except that science is a central theme.

Any science fiction that has to do with the end of the world or the destruction of mankind is known as "apocalyptic" or “dystopian” sci-fi. In this sub-genre, you might find:

Soft sci-fi typically deals less with the complications of applied science and more with the effects of science. Here’s a few titles that you’ll find here.

This type of science fiction deals with the long-term effects of a life lived in space, such as Star Trek or Star Wars. Other examples might include:

There are many examples of genres and subgenres. The movies, books, literature, and entertainment you enjoy fall into one of these genres. Now that you have a solid understanding of genres, dive into theme examples in literature.