Examples of Gibberish: Words and Sentences

Whether you are speaking to a small child or can’t think of words to describe something, you have likely resorted to speaking gibberish at some point. Gibberish consists of speech sounds that are not real words and have no real meaning, but it can also be sounds that are added to real words in order to form a “secret language.” 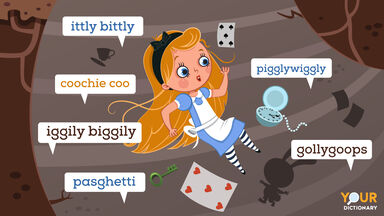 Alice in Wonderland and Examples of Gibberish
Advertisement

These examples of words that sound like normal speech are really gibberish.

Examples of Gibberish in Sentences

While the words in these gibberish sentences don’t make sense, you can interpret them in context because the words around them give the gibberish words meaning.

Sometimes the best way to understand a concept is by hearing or seeing it. Several writers and creators have used gibberish in their works for comedic or whimsical purposes.

The poem "Jabberwocky" in Lewis Carroll's Through the Looking Glass is perhaps the most famous example of gibberish. Lewis Carroll, whose real name was actually Charles Lutwidge Dodgson, was famed for his love of nonsensical language and inventing new words. Here is an extract from the poem:

"Twas brillig, and the slithy toves
Did gyre and gimble in the wabe;
All mimsy were the borogoves,
And the mome raths outgrabe.
Beware the Jabberwock, my son!
The jaws that bite, the claws that catch!
Beware the Jubjub bird, and shun
The frumious Bandersnatch!"

The Great Dictator by Charlie Chaplin

One of the most famous cinematic examples of gibberish is Charlie Chaplin’s 1940 film The Great Dictator. In it, Chaplin plays Adenoid Hynkel, a clear parody of Adolf Hitler, who is the dictator of Germany and aspires to be dictator of the world.

Chaplin came from the era of silent film, but by 1940 everyone was making movies with sound. True to his style, he opted not to speak for his other role in the film — the iconic Tramp character he had portrayed since the 1920s — but spoke often as Hynkel by uttering rapid-fire German-sounding gibberish. There are no “translations,” which adds to the humor and horror of the scene as English-speaking audiences at the time would have heard Hitler on the radio regularly without understanding what he was saying.

In addition to nonsense words, phrases and sentences, there is also a pseudo-language called Gibberish. The language is similar to Pig Latin and is used by people who want to play games with a secret language. In Gibberish, you simply add a nonsense sound to a preexisting word and insert this sound into every word.

To speak the Gibberish language, break each word down into its syllables. Each syllable will usually have a vowel sound. Then add othag before each vowel sound. Some examples of Gibberish words (and their English translations) include:

You can also insert other nonsense sounds following this pattern. For example:

Have Fun With Language

Language is meant to be fun as well as functional. Here are some devices you can use to have fun with words and sounds.