Gradualism is an evolutionary model that refers to the tiny variations in an organism or in society that happen over time to make a better fit for animals and humans in their environment. These variations allow them to survive and thrive, resulting in a slow and consistent process of change in the whole population. 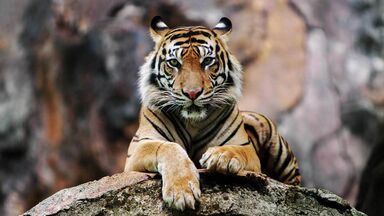 tiger is a gradualism example
Advertisement

Gradualism in biology has to do with the evolution of a species. You can think of it as slow and steady. By definition, gradualism is the small, consistent changes within an organism that take place over time to give a species an advantage.

Gradualism Examples in the Animal World

Gradualism evolution takes time to happen, especially in the animal kingdom. Explore some examples of gradualism in different types of animals.

Small variations occur over time in a population of wolves — larger ears, longer teeth and a heightened sense of smell. Wolves with these helpful traits tend to survive better than those without; as time progresses slowly, the traits gradually become the norm among the population.

A group of finches begins to exhibit different features from those in the rest of the population, including shorter beaks and black stripes on their wings. Eventually, the two distinct groups of birds are considered entirely separate species from one another.

Changes occur among a group of tree frogs which include color patterns that help them hide from predators and poisonous skin secretions that deter predators from seeking them out as a food source. As time progresses, these traits become standard in the population of tree frogs.

A bird is born with a longer beak than others in its population, which allows it to more easily forage for insects inside trees, offering it an advantage over its shorter-beaked relatives. As a great deal of time progresses, more and more birds in the population are born with this advantageous feature, eventually resulting in the entire population of birds with longer beaks.

Small variations appear over a long period of time among a population of penguins, including thicker coats of down that allow them to survive in very cold climates. Penguins with these traits survive much better than those with thinner down coats, leading to the changes becoming standard among all penguins.

Certain moths in one population gradually adopt changes in color and wing shape. After a great deal of time, the two groups of moths develop into entirely distinct species from one another.

Gradualism Examples in Society and Politics

You can think of gradualism as the slow and steady tortoise working on winning the race. Now that you know how animals can evolve gradually, and you have plenty of examples that help to better illustrate the gradualism concept, check out examples of evolution in biology.