Habituation is a learned behavior in which an individual's response to stimuli decreases over time. Basically, they get used to something happening, and no longer respond to it. Keep reading for many examples of habituation that occur in both animal and human behavior every day. 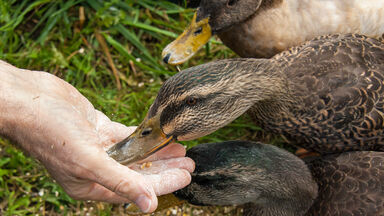 example of habituation ducks eating out of hand
Advertisement

Some habituation examples in the animal world are:

Habituating an animal to human presence is an important step in domestication. However, it can have unforeseen costs for wild animals who grow to depend on human presence for their food. When the humans are gone, these animals have not adopted skills to fend for themselves, and their habituation can lead to starvation.

Examples of Everyday Habituation in Humans

When you’re told to “get used to it,” you’re really being told to habituate to something in your environment. As picky as we are, humans are as talented as animals when it comes to gradually lowering their response to a new stimulus. Some examples of human behavioral habituation include:

In all of these cases, the humans are responding to a stimulus as an annoyance rather than a threat. But like their animal counterparts, humans are able to habituate in their environment. They can successfully ignore or tune out stimuli that had previously been disruptive.

Another context in which you might find the word habituation is when discussing a body’s response to a substance. Scientists and doctors use this term to describe a patient’s psychological dependence to a substance, such as drugs or alcohol. The more they use the substance, the less of a threat they perceive, so they use it without concern.

However, it’s not meant to describe the body’s biological dependence, which is known as addiction. The term drug habituation is outdated in the medical world, and has largely been replaced with drug dependency or substance dependency as scientists better understand the biological and psychological effects of substance abuse.

Psychology Helps Us Understand the World

Now you have seen plenty of examples of habituation and you can recognize habituation in the world around you. Habituation, however, is only one type of learned behavior. Check out these examples of operant conditioning to see how positive or negative reinforcement can establish (or eliminate) a desired behavior.