A haiku is traditionally a Japanese poem consisting of three short lines that do not rhyme. The origins of haiku poems can be traced back as far as the 9th century. 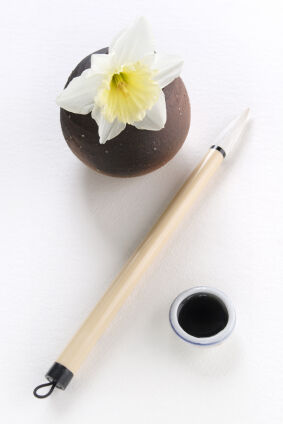 Pen and ink as examples of haiku poems

A haiku is considered to be more than a type of poem; it is a way of looking at the physical world and seeing something deeper, like the very nature of existence. It should leave the reader with a strong feeling or impression. Take a look at the following examples of traditional and modern haiku poems to see what we mean.

There were four master haiku poets from Japan, known as "the Great Four:" Matsuo Basho, Kobayashi Issa, Masaoka Shiki, and Yosa Buson. Their work is still the model for traditional haiku writing today. We have also included examples from Natsume Soseki here, a famed novelist and contemporary of Shiki, who also wrote haiku.

Reviewing examples of haiku poems is an excellent way to become familiar with this form of poetry and the sensory language it uses, and gain some inspiration.

In Japanese, there are five "moras" in the first and third line, and seven in the second, following the standard 5-7-5 structure of haiku. A mora is a sound unit, much like a syllable, but is not identical to it. This rhythm is often lost in translation, as not every English word has the same number of syllables, or moras, as its Japanese counterpart. For example, haiku has two syllables in English and in Japanese, it has three moras.

An old silent pond...
A frog jumps into the pond,
splash! Silence again.

Autumn moonlight-
a worm digs silently
into the chestnut.

In the twilight rain
these brilliant-hued hibiscus -
A lovely sunset.

Here are three examples of haiku poems from Yosa Buson (1716-1784), a haiku master poet and painter:

A summer river being crossed
how pleasing
with sandals in my hands!

In the moonlight,
The color and scent of the wisteria
Seems far away.

Here are three examples of haiku from Kobayashi Issa (1763-1828), a renowned haiku poet:

Trusting the Buddha, good and bad,
I bid farewell
To the departing year.

Everything I touch
with tenderness, alas,
pricks like a bramble.

Here are seven examples of haiku poems from Masaoka Shiki (1867-1902), credited with reviving the haiku and developing its modern format:

I want to sleep
Swat the flies
Softly, please.

After killing
a spider, how lonely I feel
in the cold of night!

For love and for hate
I swat a fly and offer it
to an ant.

A mountain village
under the piled-up snow
the sound of water.

Night; and once again,
the while I wait for you, cold wind
turns into rain.

The summer river:
although there is a bridge, my horse
goes through the water.

A lightning flash:
between the forest trees
I have seen water.

Natsume Soseki (1867-1916) was a widely respected novelist who also had many fairy tales and haiku published. Here are three examples of his haikus:

The lamp once out
Cool stars enter
The window frame.

The crow has flown away:
swaying in the evening sun,
a leafless tree.

Many modern western poets do not subscribe to the 5-7-5 pattern. The Academy of American Poets recognizes this evolution, but maintains that several core principles remain woven into the tapestry of modern haiku. That is, a haiku still focuses on one brief moment in time, employs provocative, colorful imagery, and provides a sudden moment of illumination.

From across the lake,
Past the black winter trees,
Faint sounds of a flute.
- Richard Wright

Lily:
out of the water
out of itself
- Nick Virgilio

Nightfall,
Too dark to read the page
Too cold.
- Jack Kerouac

Just friends:
he watches my gauze dress
blowing on the line.
- Alexis Rotella

History and Structure of Haiku Poems

A haiku consists of three lines, with the first and last lines having five "moras," and the middle line having seven (referred to as the 5-7-5 structure). Since the moras do not translate well into English, the haiku has been adapted to where syllables are used as moras.

Haiku poems started out as a popular activity in the 9th-12th centuries in Japan called "tanka." A tanka was a progressive poem, where one person would write the first three lines with a 5-7-5 structure, and the next person would add a section with a 7-7 structure. The chain would continue in this fashion.

The first verse was called a "hokku" and set the mood for the rest of the verses. Sometimes there were hundreds of verses and authors of the hokku were often admired for their skill. In the 19th century, the hokku took on a life of its own and began to be written and read as an individual poem. The word haiku is derived from hokku.

The Evolution of Haiku Poems

Isn't it wonderful to know that such a rich tradition has lasted the test of time? The evolution of haiku might be perceived as a natural process, like anything else in life, but a dedication to its authenticity has preserved its core principles.

While master poets in the 1800s, such as Issa, wrote their haiku in the traditional 5-7-5 pattern - if read in Japanese - the premise was still the same as it is today. These master poets contemplated small snippets of time, used imagery in their language, and sought out a sense of enlightenment in their prose.

More recently, poets like Jack Kerouac paved the way for a freer rhythm in haiku. However, the same tiny moments in time are still captured in a very colorful and enlightened manner. A haiku remains reserved for those special moments in life when you want to examine the very nature of existence, from a church bell ringing out in the night to the staggering moment you realize he loves you. You can even write funny haikus.

Follow our rules for writing a haiku and capture your own special moment.